by Dev | Things To Do, Travel Fun, Travel Recommendation | 3 comments 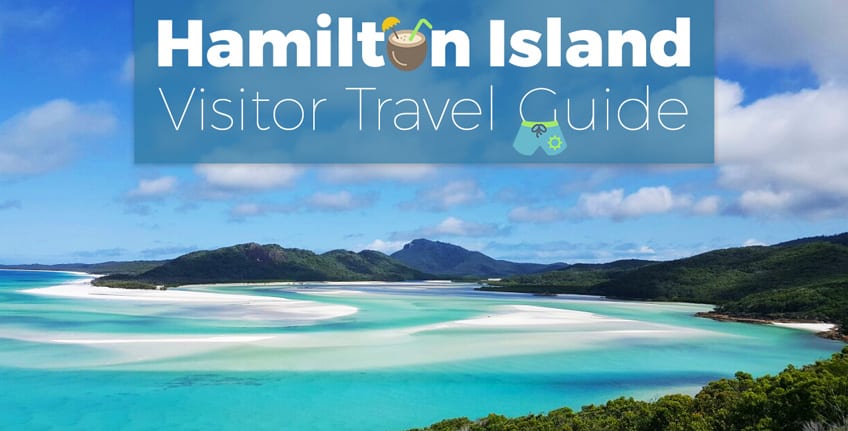 “The Wittiest Sunday of Them All”

No serious globetrotter’s passport is complete without an Australia stamp in it, and Hamilton Island is a gem worth putting on your bucket list.

Located in the Whitsunday Islands off the coast of Queensland, it lies 551 miles (887km) north of Brisbane and 318 miles (512km) southeast of Cairns.

What makes Hamilton Island so special for adventure seekers and globetrotters is that it is slap bang on the Great Barrier Reef, one of the seven fantastic Natural Wonders of the World and a worthy UNESCO World Heritage Site.

Hamilton Island offers a pleasant contrast to Australia’s surfing beaches, modern cities and uninhabited outback. Scattered across the sapphire waters on the Great Barrier Reef, the 74 Whitsunday Islands are unlike anywhere else in the world, as you’ll soon discover.

Hamilton Island is one of the largest and most populated of the islands in this archipelago, although to put it into perspective, the island has just 1200 inhabitants and covers less than 2 square miles (5km²) so it’s very walkable! 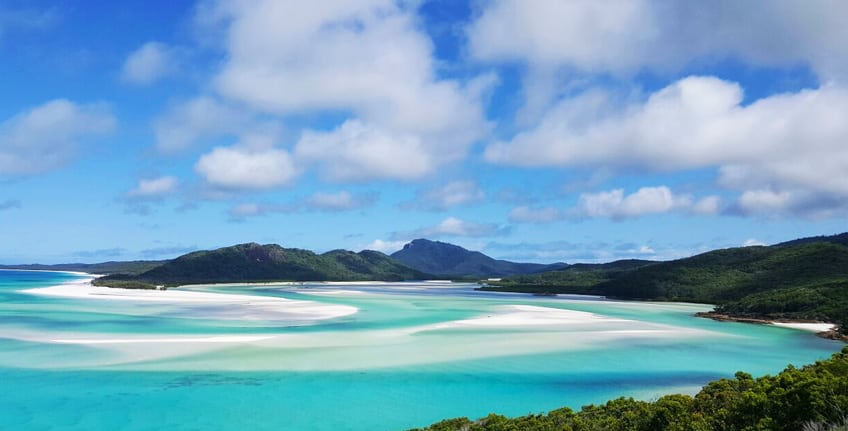 Hamilton Island is considered the Gateway to the Great Barrier Reef. Reasons to put this high on your bucket list include the natural beauty and serenity of this far-flung destination.

You can look forward to a host of cultural, sporting and ocean-based activities such as whale watching, sailing, golf, watersports, wildlife, sport fishing, snorkeling, diving and exquisite dining.

Nature has surrounded Hamilton Island with bountiful seas teeming with colorful fish and jaw-dropping marine life including many endemic, threatened and endangered species.

Snorkeling and diving the Great Barrier Reef will introduce you to some of the 1,900 species of fish, 350 species of corals, 4,000 types of mollusk and over 400 species of sponge*, not to mention seabirds, dugongs, sea turtles, starfish and dolphins.

Get Our Free Packing Checklist! Everything you need to make your next trip seamless!

ONE – Golf on Hamilton Island, Australia
Hamilton Island Golf Club is a 18-hole Championship Golf Course with a Driving Range, Pro Shop and fun Mini Golf for all the family.

Located a short helicopter trip or 5-minute boat ride away on Dent Island, Hamilton Island Golf Club is the only Australian golf course on its own island. Spectacular views on every fairway lead to the Clubhouse for a long and leisurely lunch. They also do some pretty good packages if you are a serious golfer!

TWO – Wild Life Park on Hamilton Island
See plenty of native Australian wildlife including wild kookaburras at the small but interesting Wildlife Park and zoo. Have breakfast with the koalas, hand-feed kangaroos and take a guided tour to meet all the animals. It’s a great photo op!

FOUR – Quad Biking
Book a fun ATV tour on Hamilton Island with Offroad Adventure Tours and go quad biking along scenic fire trails to the Resort Lookout. Venture into the bush and learn about the island and its wildlife from a local expert guide.

FIVE – Infamous Helicopter Tours
Take an unforgettable helicopter flight above the Whitsundays coupled with time at Reefworld in the “Best of Both Worlds” Tour. You get a thrilling 30-minute flight out to the moored pontoon at Reefworld where you can snorkel on the Great Barrier Reef. The trip includes an afternoon visit to Whitehaven Beach for sunbathing and a picnic before flying you back to Hamilton Island.

SIX – Beach Snorkeling
Charter a boat or take the Reef Ryder Tour to Whitehaven Beach where you can snorkel on the reef right from the pristine sandy beach.

More ideas on what to do while visiting Hamilton Island on their tourist website and on TripAdvisor.

FREE Things To Do:

Bushwalk/Hike – Resort Lookout
Another wonderful hike starts at the Whitsunday Apartments and climbs through native bush to Resort Lookout for 360-degree views of the marina, island and sea. It is the second highest point on the island after Passage Peak. Allow 30-45 minutes each way on a trail with moderate difficulty.

Bushwalk/Hike – Passage Peak
Follow the Scenic Trail and connect with Saddle Trail for a spectacular island hike. Stop at Hill Top Viewing Area before pressing on up the steep ascent on the “Happy Stairs” to Passage Peak, the high point on Hamilton Island with magnificent views.

Bushwalk/Hike – Coral Cove
Starting from Palm Valley, an uphill climb along the trail brings you to as choice of routes. Head right to descend to tranquil Coral Cove or follow the left-hand trail to Resort Lookout.

Nature/Wildlife Spotting
Birdwatching, marine and wildlife spotting can be enjoyed almost everywhere on Hamilton Island if you keep your ears and eyes open. You can even spot playful dolphins playing offshore.

In whale migratory season (June to September) you may spot the telltale spouts of water indicating the presence of humpback whales. Hang around and you may see them breach, “spyhop” or get a wave of a tail fluke as they dive.

Free Shuttles
Take a ride around the island on the complimentary Hamilton Island Shuttle and visit the marina, beaches, shops, resorts and tackle shops.

More ideas on what to do while visiting Hamilton Island on their tourist website and on TripAdvisor.

Hamilton Island has a good range of bars, take-away outlets and gourmet restaurants with something for every palate and pocket. Local delicacies include delectable seafood (make sure you get fish at least once!), and most restaurants offer superb sunset views.

ONE – Bommie Restaurant
Located in the Hamilton Island Yacht Club, the award-winning Bommie Restaurant is the signature restaurant on the island. It offers contemporary dining, Australian favourites and seasonal produce. The local oysters and champagne are the best!

TWO – Coca Chu
Dining at coca chu is the chance to sample delicious Asian cuisine in an elegant setting.

THREE – Mariners
As its name suggests, Mariners in the Marina Village combines delicious local seafood with stunning views across the marina – the perfect setting for any upscale restaurant on Hamilton Island.

FOUR – Sails
Sails overlooks the idyllic Catseye Beach and is open for breakfast, lunch and dinner daily. It’s the top place for steaks on Hamilton Island and has panoramic views from the terrace.

Hamilton Island is the only island on the Great Barrier Reef with a commercial airport, so you’ll easily be able to arrange flights to Hamilton Island Airport from most major cities in Australia including Sydney, Melbourne, Cairns and Brisbane.

It has daily flights with several airlines including Qantas, Jetstar and Virgin Australia. Checkout FlightHub which has pretty cheap deals and alerts you of phone only offers through airlines.

Flying into Hamilton Island is a breathtaking experience. You get the chance to look down on isolated islands scattered across the clear azure waters, each fringed with a strip of gleaming white sand.

The main mode of transport on pint-sized Hamilton Island is by golf buggy seating 2-4 passengers.

You can rent your own fun buggy for the duration of your stay or use the free Island Shuttle Service that circumnavigates the island. The shuttle offers a hop-on, hop-off service from 7am to 11pm. However, nowhere is far to walk to ;)

We would love to offer you some cheap options for accommodation but the fact is this place is kind of expensive due to it’s prime real estate!

Qualia – $$$
The ultimate place to stay on Hamilton Island is qualia, the lower-case “q” underlining the laid-back, understated atmosphere of this world-class Relais&Chateaux resort.

Named “Best in the World” in the Condé Nast Traveler Readers’ Choice Awards 2012, this five-star adults-only haven offers one-bedroom pavilions, restaurants and a full service spa in an idyllic setting.

Reef View Hotel – $$$
Situated close to Catseye Beach and the Yacht Club, the four-star Reef View Hotel has garden and sea views from its spacious rooms and suites.

Palm Bungalows – $$
Palm Bungalows offer cabin accommodation in the lush jungle with resident wallabies, cockatoos and native wildlife. Comfortable, private and close to Catseye Beach, this lush resort has everything you need.

The one-bedroom apartments have a living area and full kitchen for cooking up the day’s catch. The private balcony is the perfect place to view your day’s photographs and share them with envious colleagues, family and friends via social media.

You can also see what deals the Hamilton Island website has on at the moment, they do specials every now and again!

More information and how to apply and eligible countries on the Australian Government’s website.

The Whitsunday Islands enjoy a tropical climate and the average temperature is a balmy 80°F (27°C).  Being in the southern hemisphere, you’ll find the cooler months on Hamilton Island are July and August (71-73°F or 22-23°C).

The hottest months are December through February with a very acceptable average temperature of 86-87°F (30-31°C).

Tropical showers are most likely from January through March, but they are unlikely to dampen your fun!

Originally inhabited by the Ngaro Aborigines, explorer Captain James Cook dropped in on his charting expedition in 1770 and named the islands the Whitsundays, mistakenly believing he had reached them on the Feast of Whitsunday.

The islands gradually evolved into an upmarket tourist destination in the 1970s, famous for their sailing opportunities and as a jumping off point for exploring the Great Barrier Reef.

This eco-friendly island destination is now owned by the family of Australian winemaker, Bob Oakley and what makes it particularly special is that it is still two-thirds undeveloped.

April / May sees runners lining up to take part in the 21km Stamford Financial Hilly Half Marathon Challenge on the first Sunday of the month. It’s a great way to see the interior of this undulating island.

Later in May there’s the Mother’s Day Classic Walk in the Park to raise funds for breast cancer.

June hosts the Gatorade Clash of the Paddles, a tough racing event for outrigger canoes. Formerly known as the Hamilton Cup, this event offers four days of competitive sports including Stand-up Paddleboarding and Dragon Boat Racing.

August, the Audi Hamilton Island Race Week takes place with a flotilla of racing boats and superyachts competing in the regatta.

September is the best month for whale-watching. Baby humpbacks are born in the warm waters around the Whitsunday Islands and pods of whales can be seen from the shores of Hamilton Island during the breeding season.

October/early November is the Amateur Golf Championship including a One-Day Pro-Am at the Hamilton Island Golf Club. Later in the month, the Golf Club hosts the PGA Professionals Championship.

Also in November, the Fujifilm Hamilton Island Triathlon sorts out the winners from the wimps in this grueling fitness challenge. This is followed by the Fujifilm Whitehaven Beach Ocean Swim on neighboring Whitsunday Island the following day.

One final gem – coral spawning on the Great Barrier Reef generally happens sometime during November, depending upon conditions. Divers come from all over the world to see this phenomenon as the polyps emit billions of pink bundles of eggs into the ocean like a roseate snowstorm. Now that’s something really worth seeing when you visit Hamilton Island, Australia!

– See All Our Posts