“It’s More Fun in the Philippines”

Hi Mam, Hi Sir! We started our real Southeast Asia adventure by flying to Cebu City for three days of paradise (and swimming with whale sharks!), then a fast ferry to Bohol to see the famous Chocolate Hills, another ferry to explore the volcanic island of Camiguin, and a flight to Palawan for a week to visit the subterranean river in Puerto Princessa and the incredible beaches of El Nido.

Unfortunately, we were unable to make it to every place we wanted to see. In two weeks, it gets a bit hard traveling around islands since most places requires a ferry to get around. Just because we missed out on Boracay, Siargao, Cloud 9 (for surfing), and the Banaue Rice paddies, doesn’t mean we won’t be back. In fact, we can’t wait to be back and see the rest of what the Philippines has to offer!

People always said and we quote “the beaches are amazing and the women are the most beautiful”.

We thought everyone there was beautiful–the people were truly one of a kind, all with big hearts. The Philippines was an absolute paradise and a country full of adventure, delicious fish, incredible beaches, insane wildlife, and wonderful people. You will see it posted everywhere, and completely true, but it really is “more fun in the Philippines!“

ONE – Swim with Whale Sharks
We booked a day tour to swim with the whale sharks along with a heritage tour of the Island of Cebu. The whale sharks was a once in a life time bucketlist experience, and we would absolutely recommend swimming with these massive, yet friendly sharks!

TWO – Island Hop
The Philippines is made up of thousands of islands, 7,107 to be exact, so a big must is to island hop the Philippines! We hopped in a few places like off the coast in Mactan, Oslob, and El Nido. Plus, some of the snorkeling we did was absolutely incredible.

A local told us, that if you are from the Philippines, you would be privileged to make to at least five different islands in your life! So with island hopping you can easily see plenty!

THREE – Motorbike around the City
Rent a motorbike to discover the city. You have your own freedom to see and go wherever you like. We went to see the famous Chocolate Hills in Bohol by renting motorbikes for 250 Pisos each!

Renting a motorbike is probably the best and easiest way to get around a few of the islands. Not to mention the views, though.

FOUR – Visit the Island of Camiguin
White Beach in Camiguin island was really beautiful. The sand was pearly white, and the water was two different shades of blues depending on which side you were on. Best of all, you are facing Camiguin Island, which is a view of a few volcanoes, dark and palm trees.

When we were there, the clouds hovered around the peak of Mt Hibok Hibok making it look quite mysterious like it was straight out of Jurassic Park!

FIVE – The Paradise of El Nido
El Nido was certainly a place of paradise. Enjoy the beautiful beaches it has to offer or even kayak to some of the more secluded ones. We did one of the island tours (there is A, B, C, D) which all take you to different parts of El Nido. We did A and kayaked to the other islands on the other tours!

SIX – Catch your own Dinner
Our highlight in El Nido was our fishing trip. We got a private bangka, went fishing in the ocean as the sun set, caught 15 little red snappers, and then headed to our own little private beach to grill them. A true paradise!

SEVEN – The Underground River
The very touristy, yet so impressive Subterranean River in Puerto Princessa is a must. You unfortunately cannot go just on a whim there with your bike, they can and will reject you. You need a few permits and all that jazz so it was just easier to book through a touring company. They are all the same price of 1,500 Pisos.

There was a bit of waiting, but this underground river was worth it. It is a river that stretches down for 8.2 kilometers, making it the largest underground river in the world, and recently named one of the 7 natural wonders of the world!

Most countries are allowed to enter the Philippines without a visa for up to 21 days. You can easily apply for a 60 day visa online or at a Philippine embassy. Depending on where you are flying in and out of in the Philippines, there are arrival and departure fees. Or you can get these guys to organize everything for you. They are amazing and make everything super easy and straightforward!

The Philippines has some of the best tasting and freshest fish we have ever eaten! A local fish called Lapu Lapu is a little more expensive than the standard Snapper but it is definitely a moist and tasty fish, especially grilled. All seafood is quite good in the Philippines to be honest!

Another popular dish is Lechon. Lechon is roasted pig with super crunchy and delicious crackling and the juiciest pork we have ever had. I honestly think this is what dreams are made of. The best lechon is in Cebu (according to Anthony Bourdain and we trust him when it comes to food).

If you want a tasty snack, try some chicharon. It’s deep fried pig skin (sounds gross but it really is tasty!). Finally, a popular dessert choice is Halo Halo, a blend of mango jelly, chocolate syrup, beans, ube ice cream, fruit, and cereal. If you don’t know what ube is, it’s purple yams, so basically its purple yam ice cream with cereals, veggies, and fruit. What more could you want? Yum!!

If you are feeling super adventurous, try Balut, a boiled duck embyro. We haven’t tried it, but we’ve heard it is quite tasty!…coming from the locals. It might just be the whole idea of the duck embryo, and sipping the juices, and the feathers, and the possibility of a beak. Yea, no thanks!

Our favorite place we stayed at in the Philippines was Treats Guest House in Cebu. It was actually the first place we stayed but we found it had the best value for money. The rooms were quite large with good air conditioning and you could walk to local markets and restaurants. The people who run the hostel are also extremely friendly, which is always a bonus. This is where we booked our bucket list experience with the Whale Sharks and they offered us the best tour possible!

We visited the Philippines during the last two weeks of May.

There are two seasons in the Philippines, hot and humid season or monsoon season. The weather was all over the place, first hot and humid then tropical rain downpour for an hour or so. Luckily it only rained every third day or so. I think we were in the transition period of the two seasons. Other than the rain interruptions it was nice and sunny and very enjoyable over the above time period. 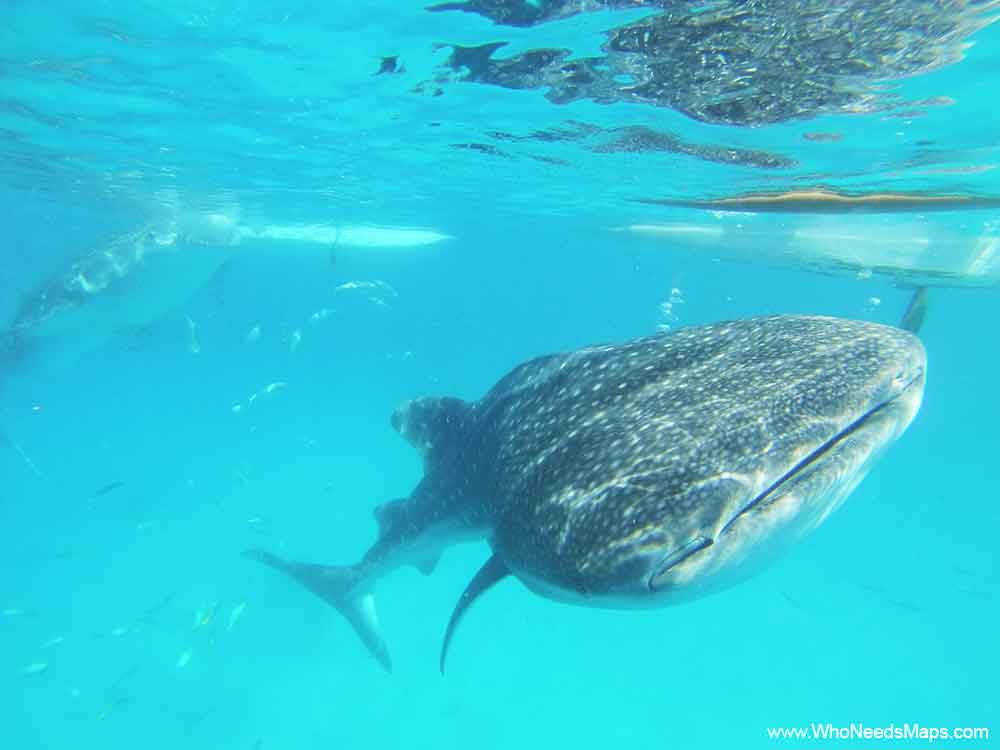 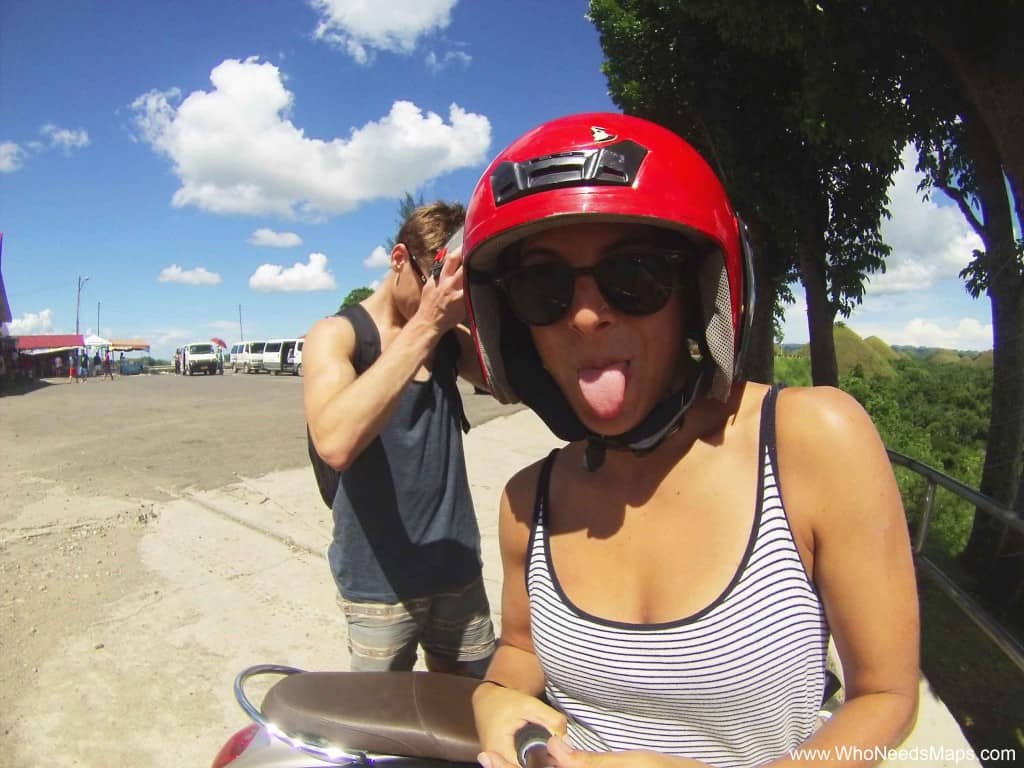 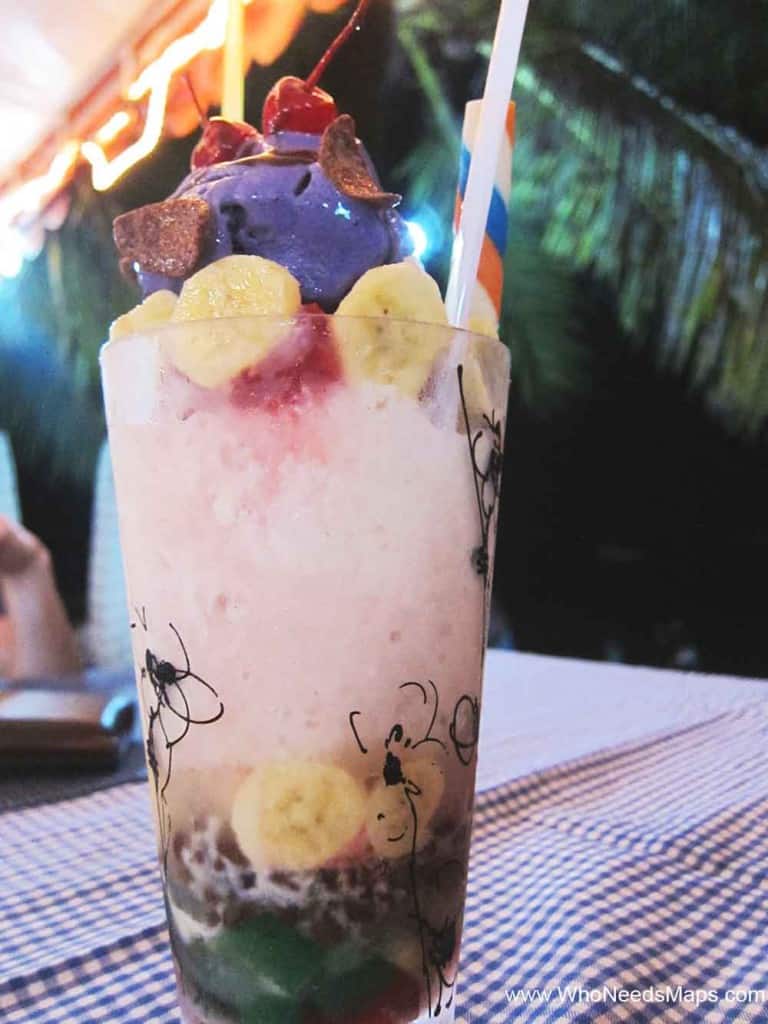 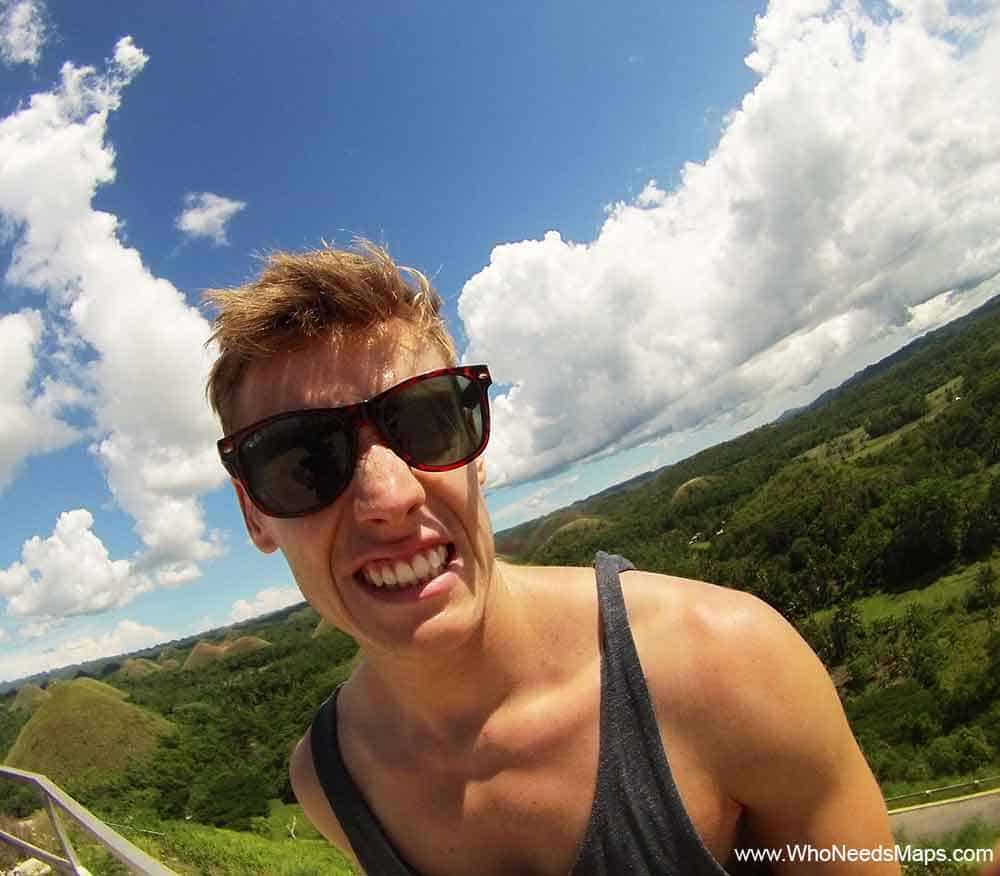 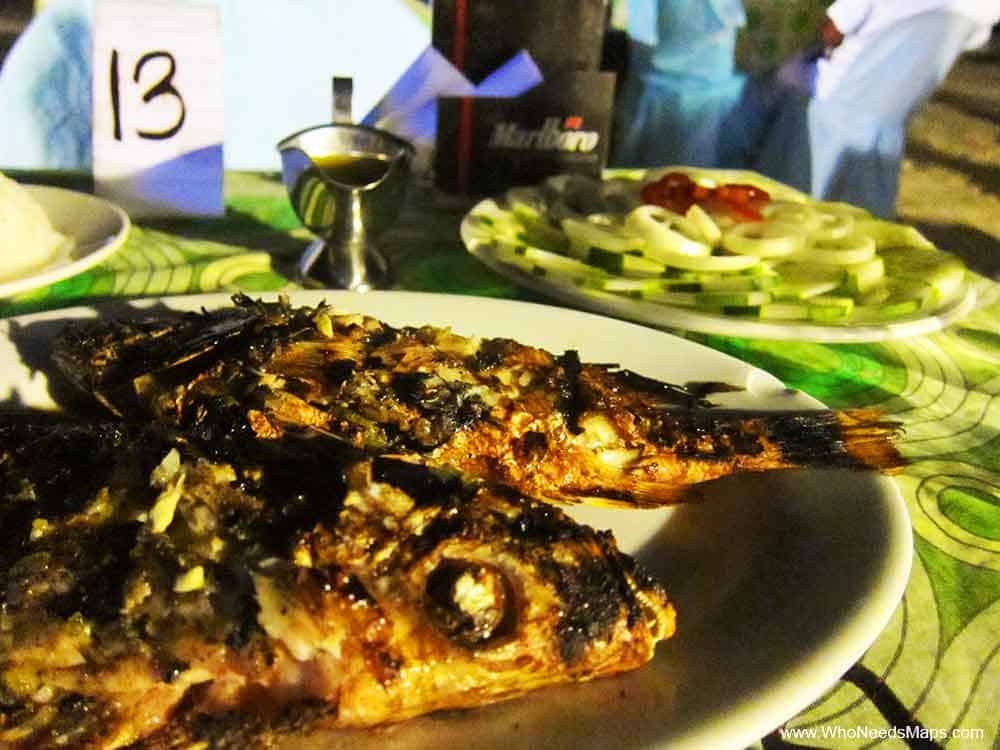 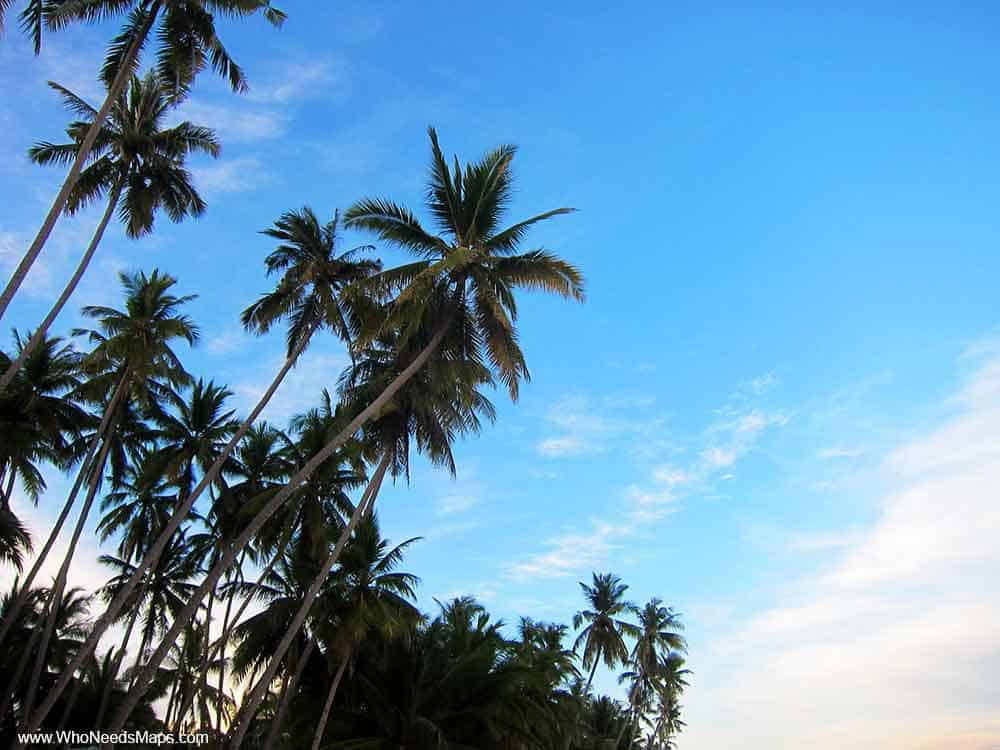 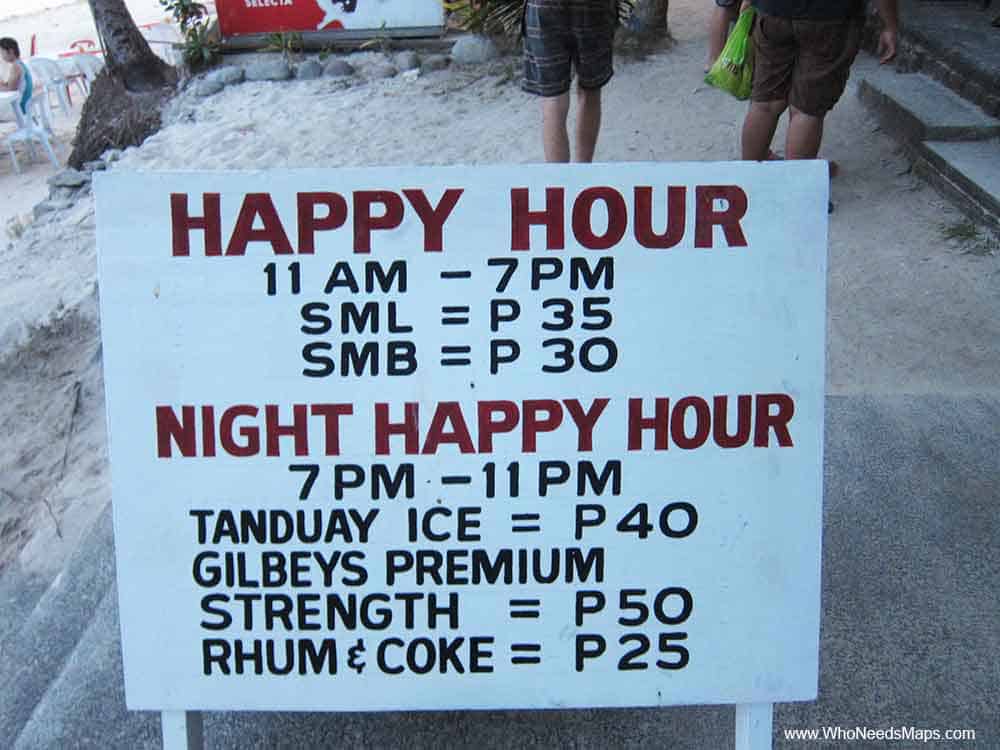 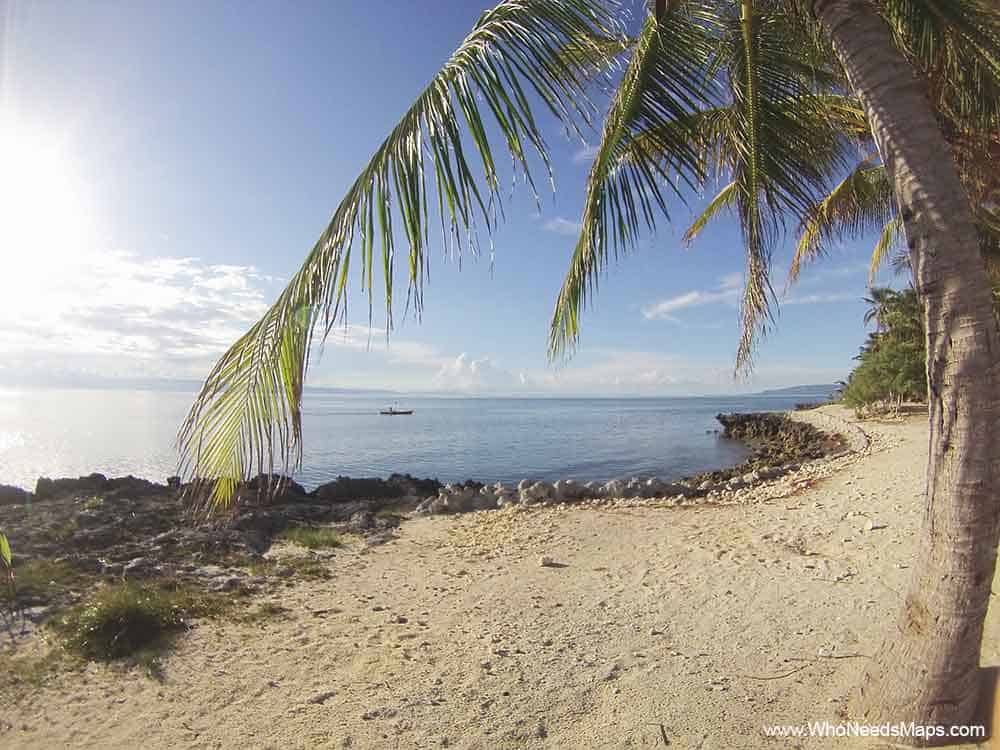 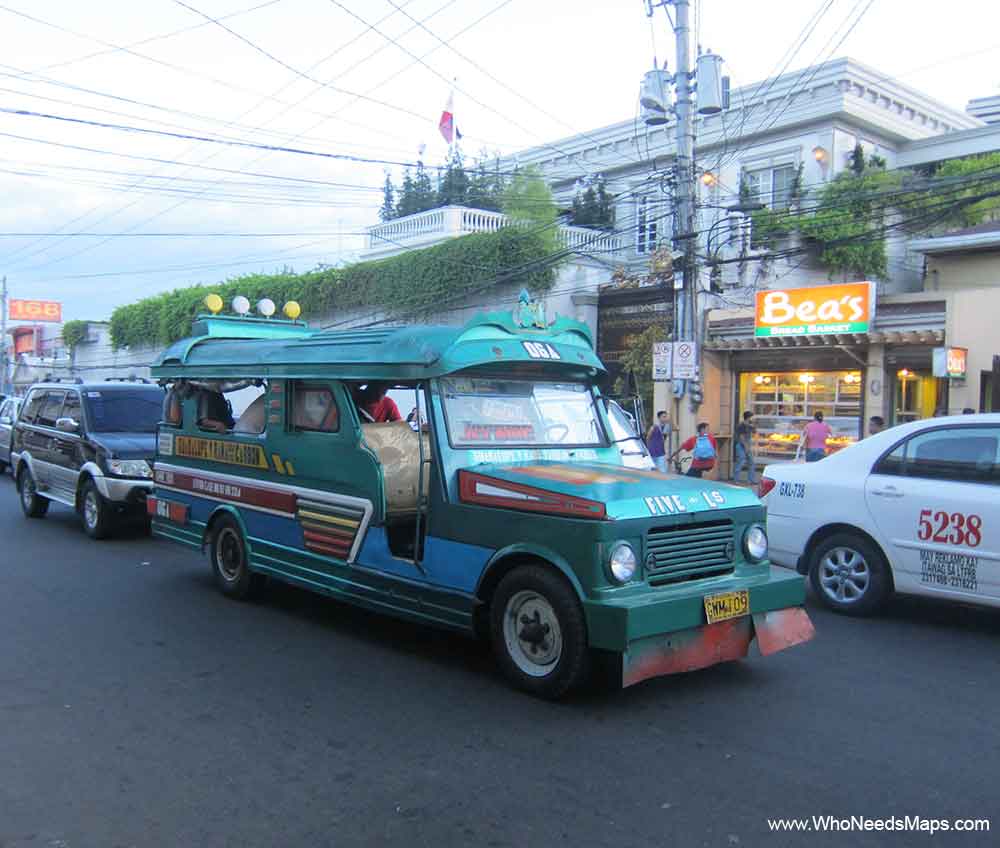 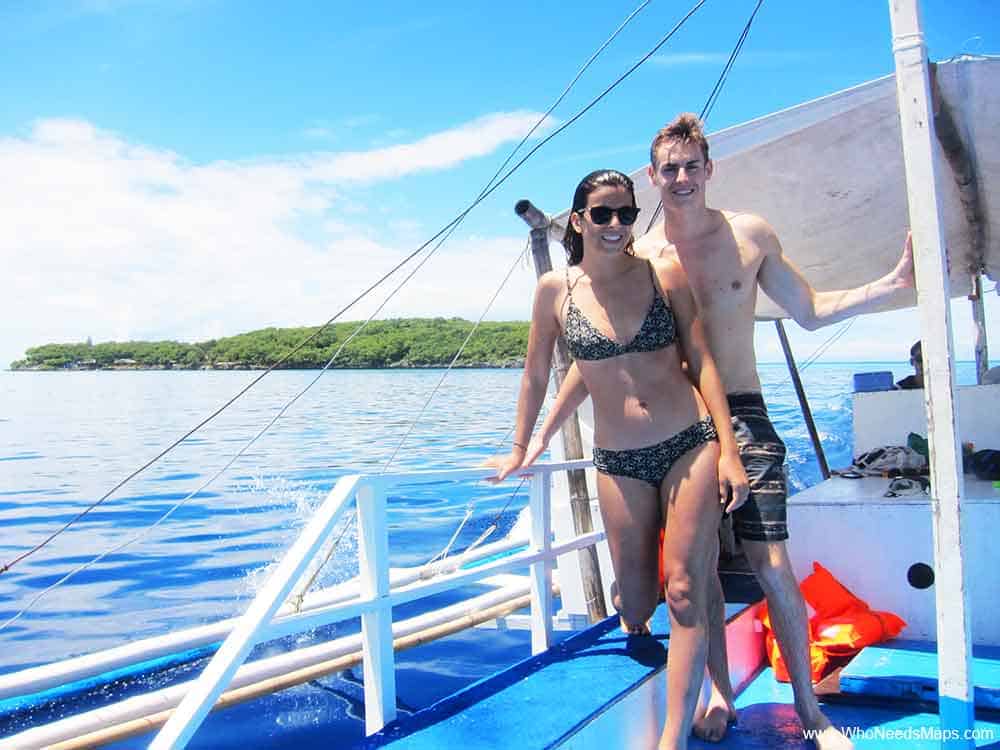 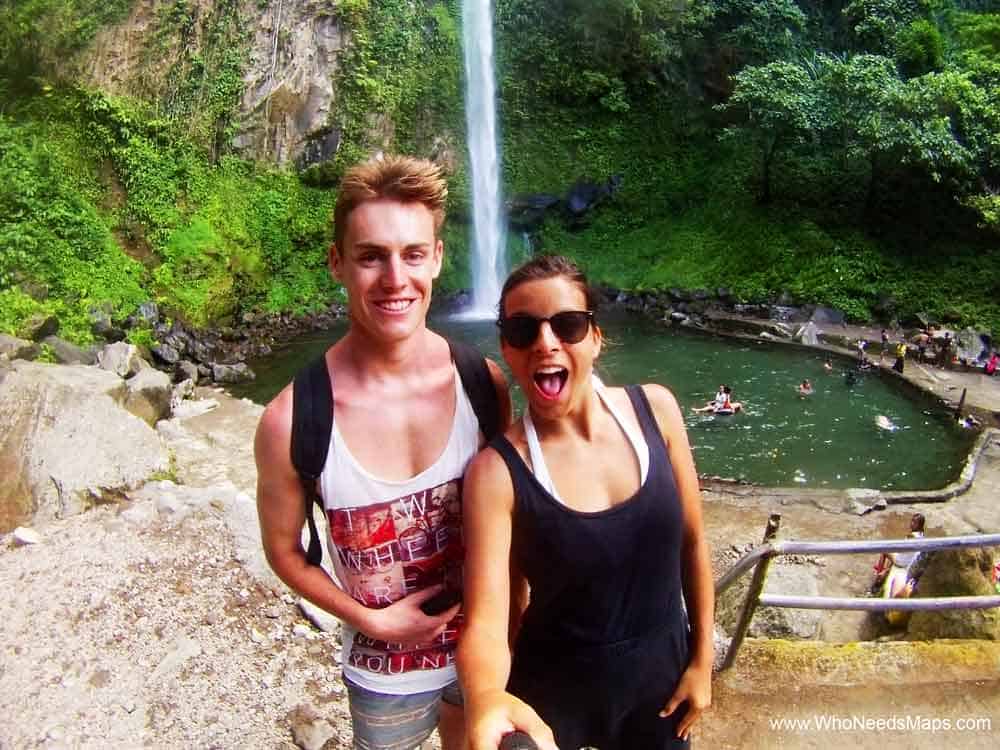 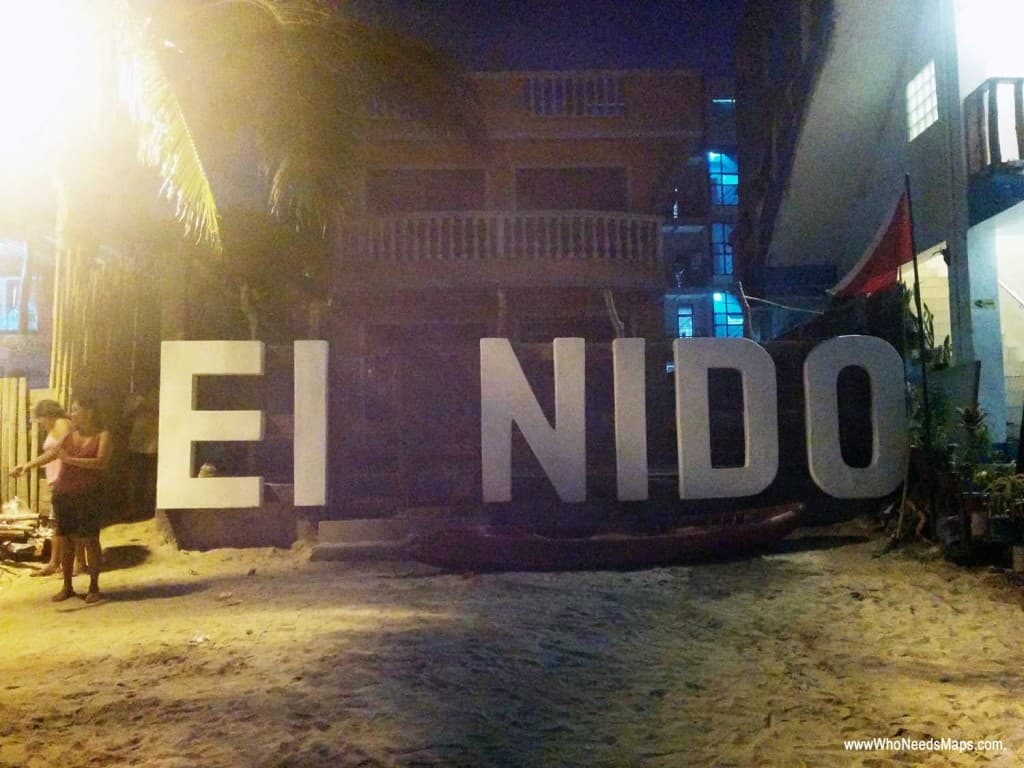 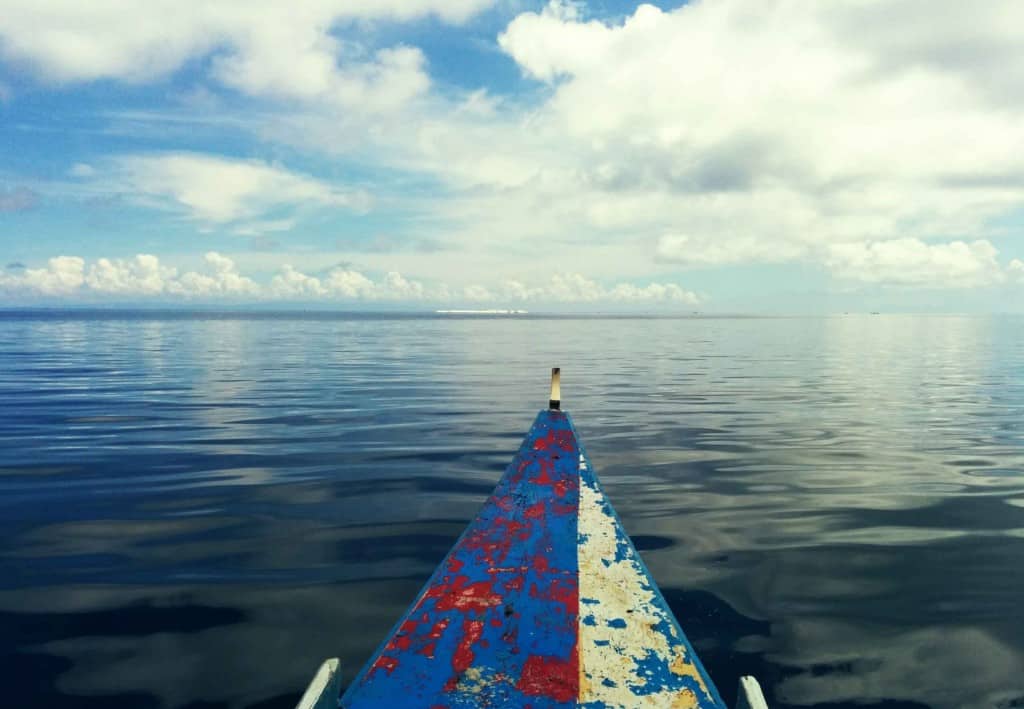 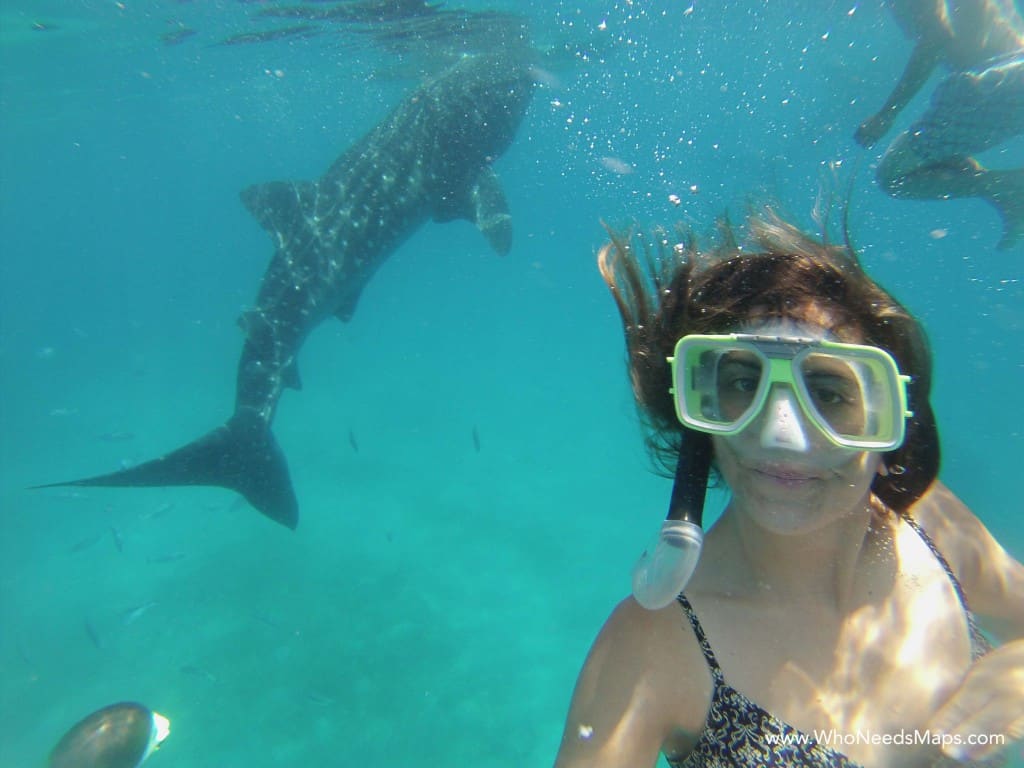 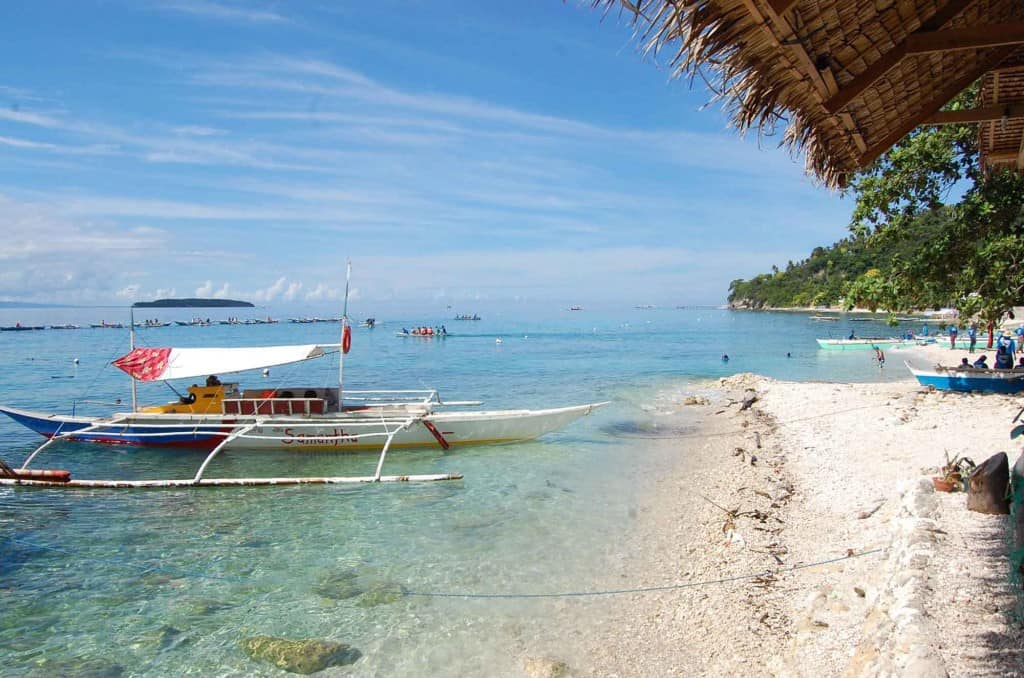 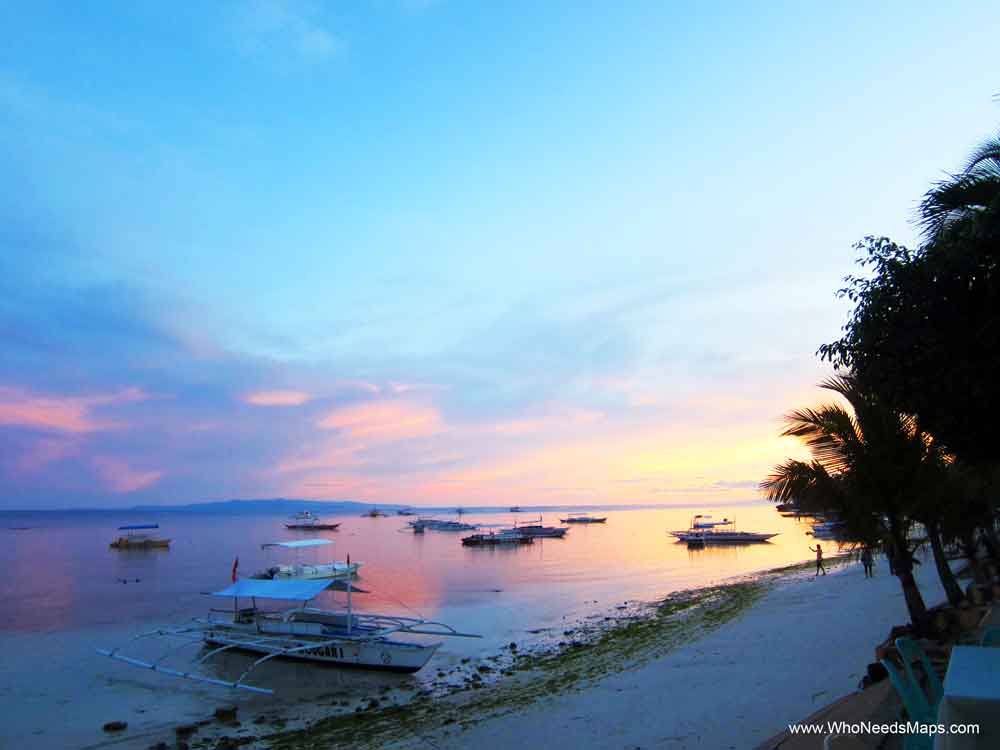 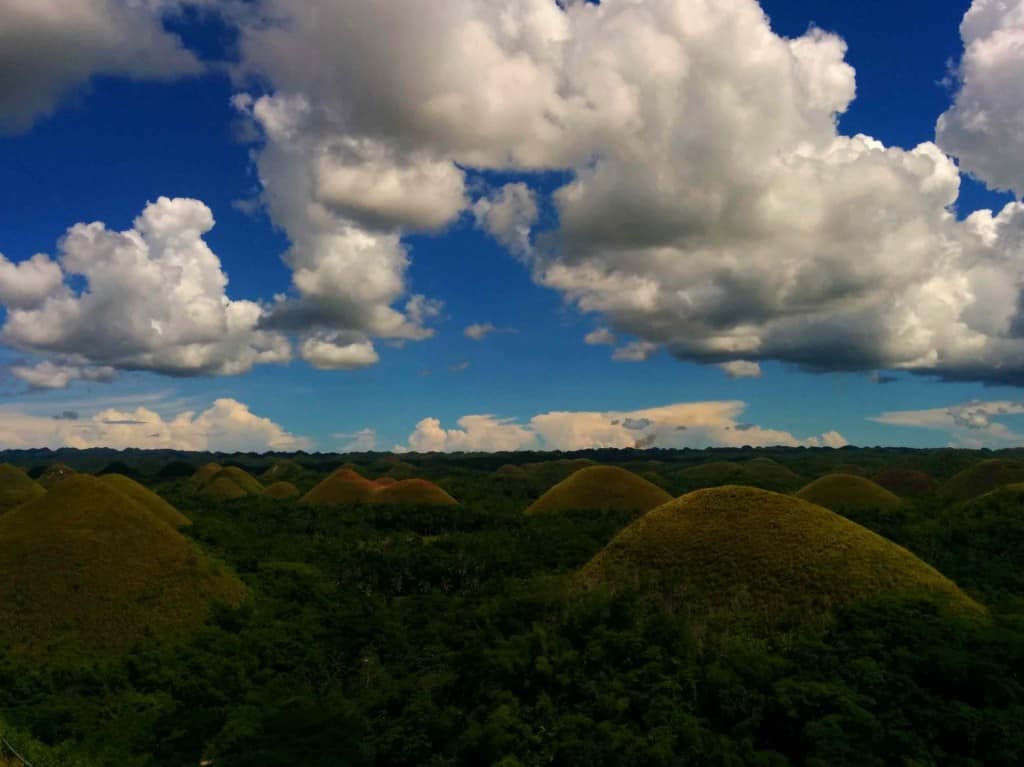 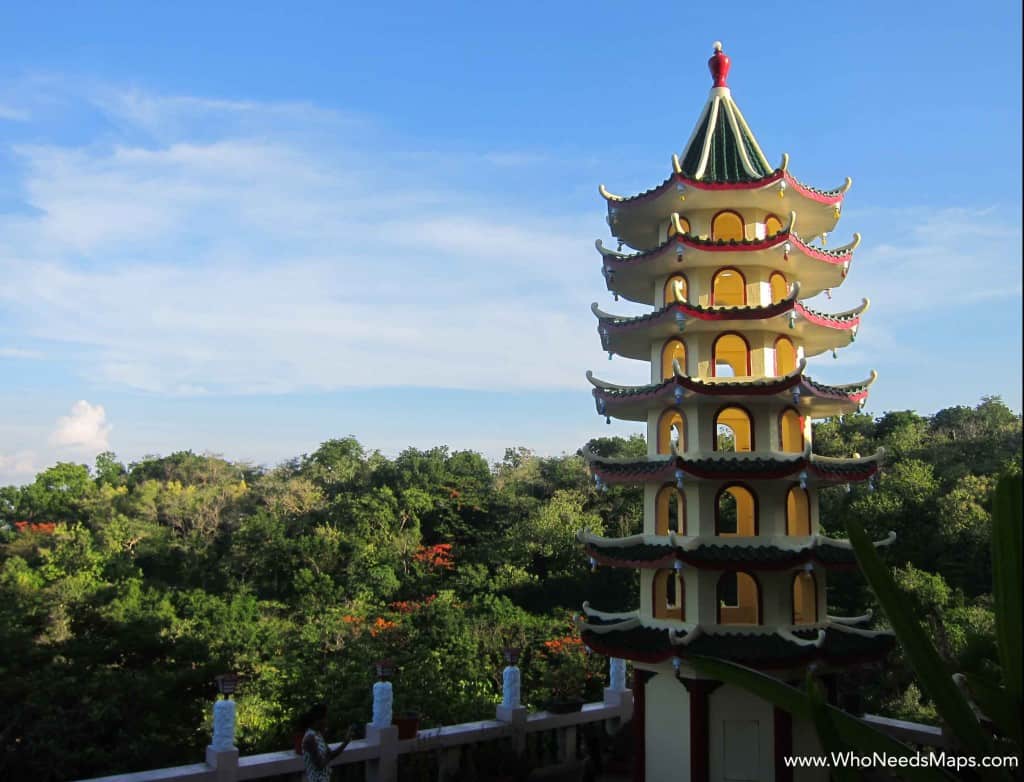 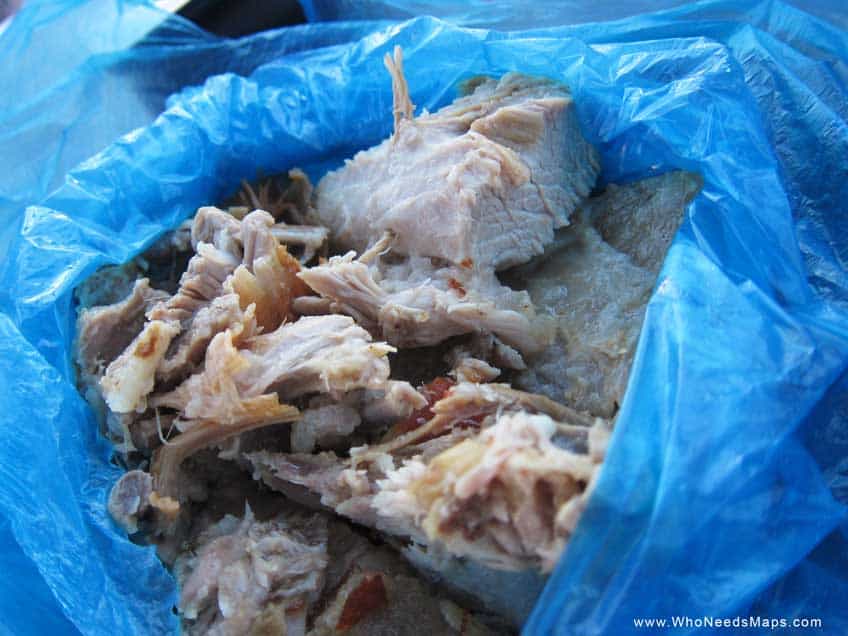 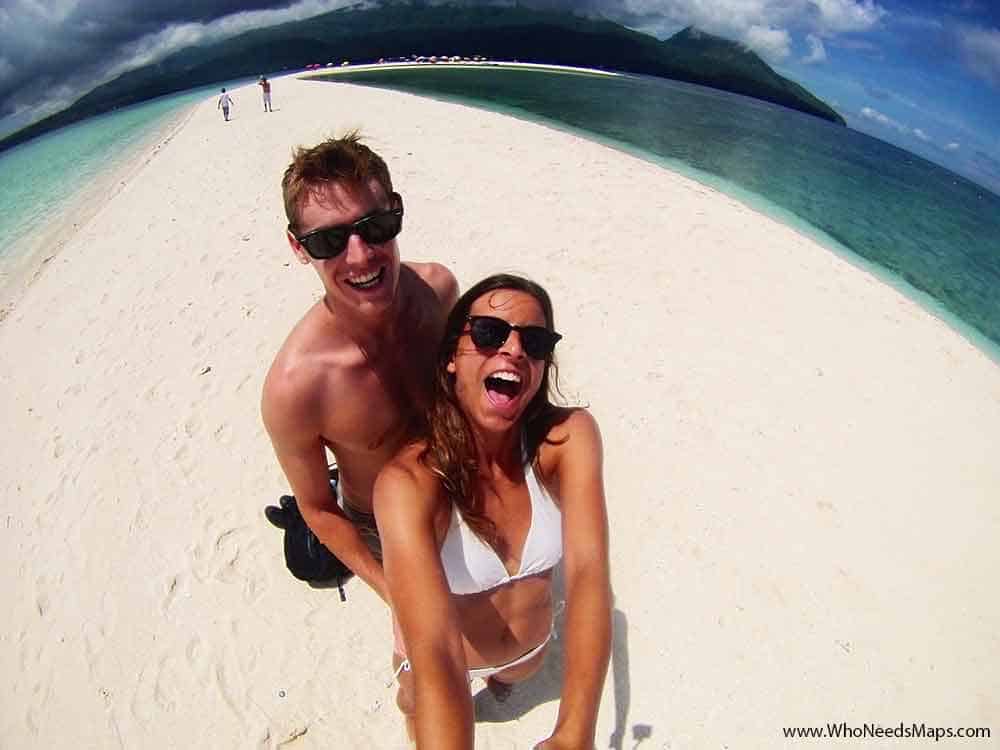 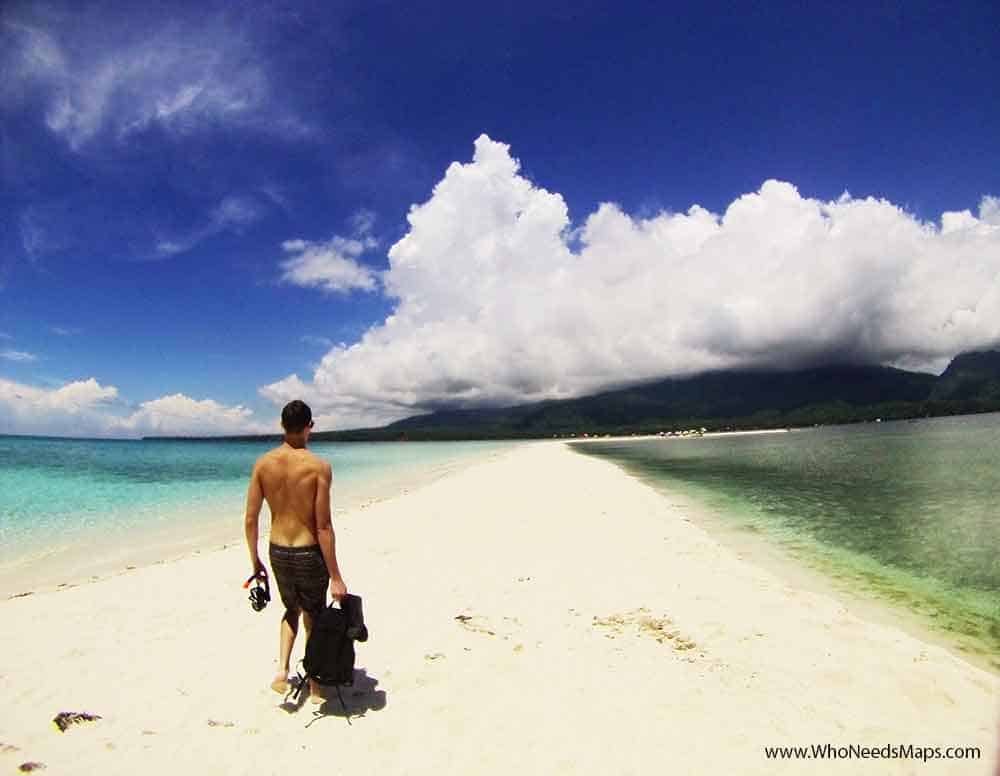 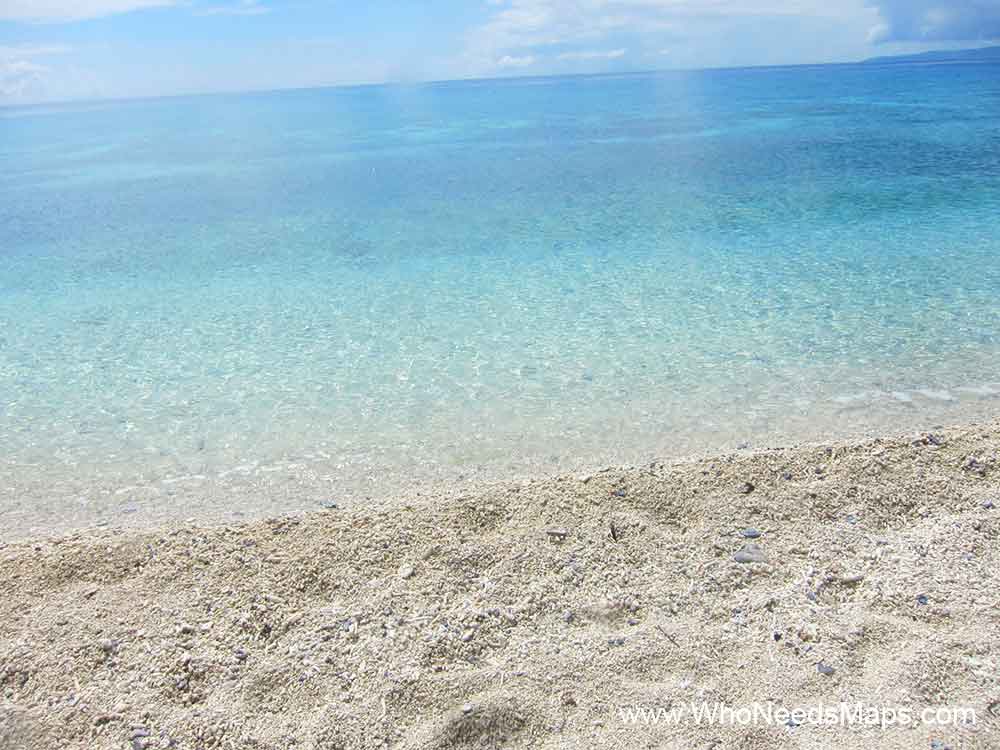