You’re in Southeast Asia, countries filled with unbelievable scenery, some great cultures to explore and learn, tasty foods, and yes, insanely wild parties! Many of the big cities are equipped with a good nightlife like Kuta, Bali, Bangkok, Pub street in Siem Reap, but we are talking actual big parties!

After 3 months of backpacking Southeast Asia, we have discovered some of the top party destinations. Every party has its reputation but then again, every experience is what you make it. So grab a beer, its time for some debauchery!

Thailand is renown for its amazing beaches, unbelievable wildlife, and the insanely wild parties. Koh Phangan, Thailand is home for the famous Full Moon Party, and every other type of moon party there could be! Thousands of travelers flock to the island every month for a night full of dancing, music, neon paint, and buckets of cheap drinks! It is like an oversized frat party.

We were especially lucky because the Full Moon Party happened on the same day as the World Cup Finals! It was awesome to see everyone painted in their country/supporting country for the game! It was wild! Make sure you party on the beach until the sun comes out! 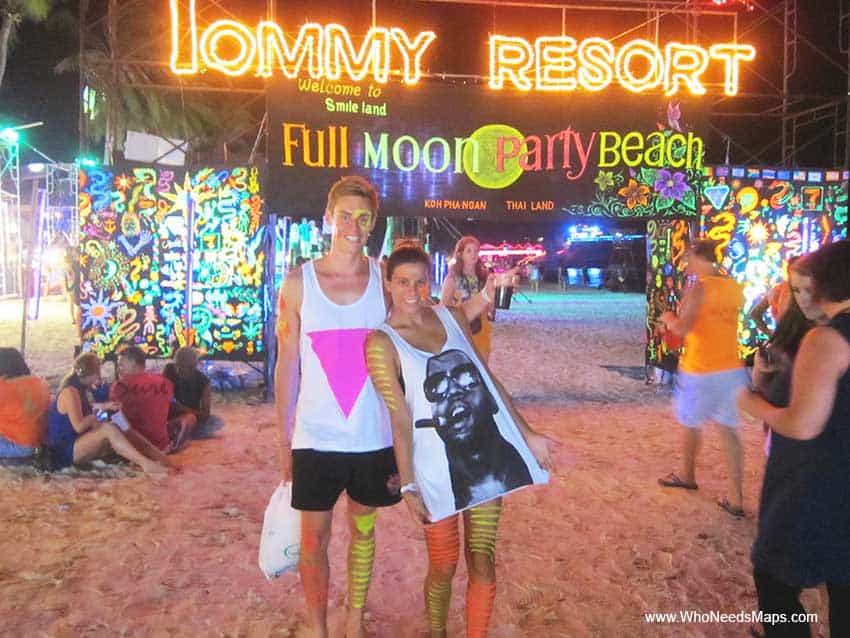 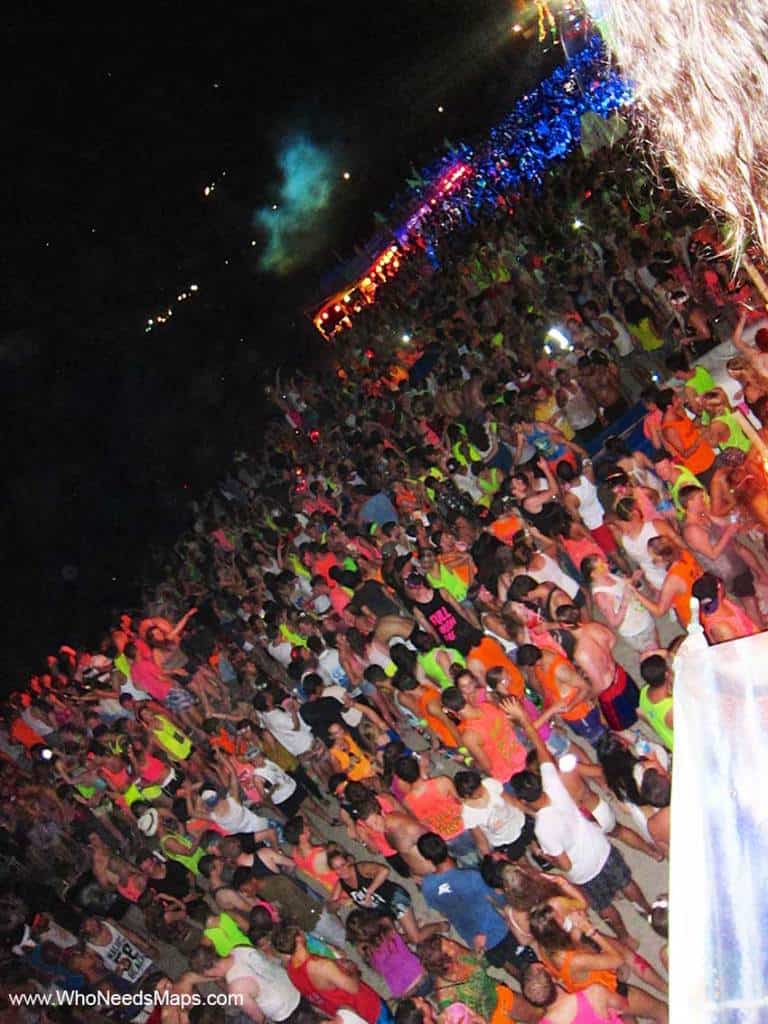 What happens when you cross a pub crawl with a river? You get the Tubing experience in Vang Vieng, Laos! Things get awesome and maybe a tad dangerous.

I mean, have you ever crossed the streets in Vietnam? That was probably a bit more dangerous than the tubing! Things have calmed down since the past few years—less bars are open and no crazy slides and swings!

You party at a bar, meet people, get drinks (and free shot and bracelet!), then hop into the tube to float down to the next.

People do get ridiculously drunk so it is important to be careful with how much you drink.

Make sure you have someone with you and maybe one of these in case you get too drunk to speak!

It was one of our favorite days in Asia and we would love to do it again! (here are a few other locations on out places revisit list) 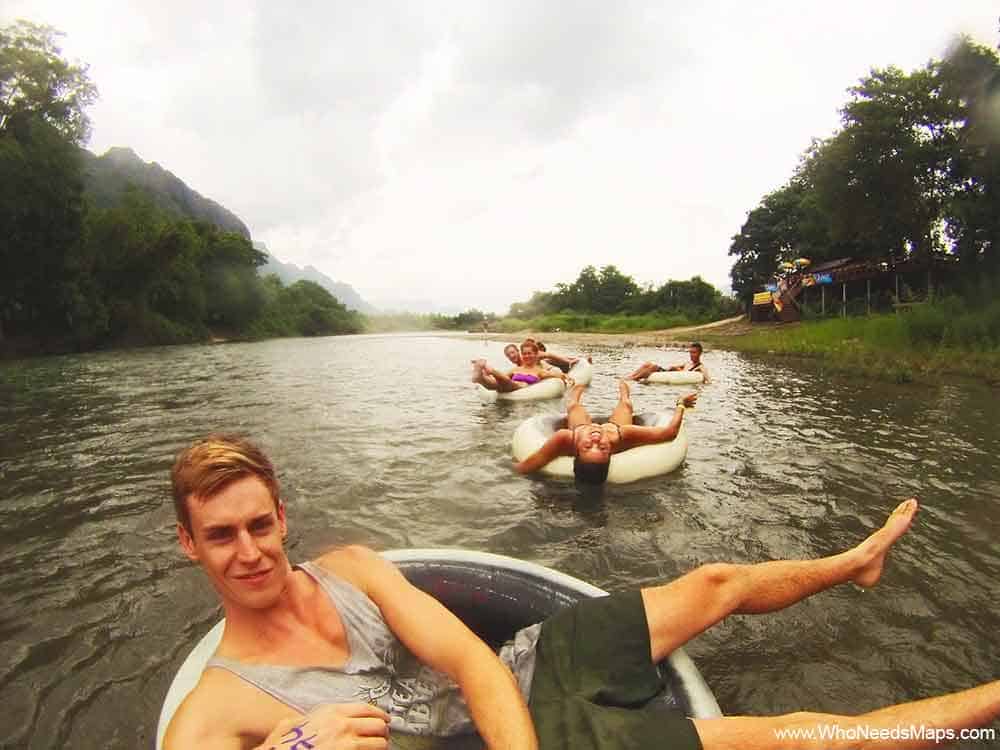 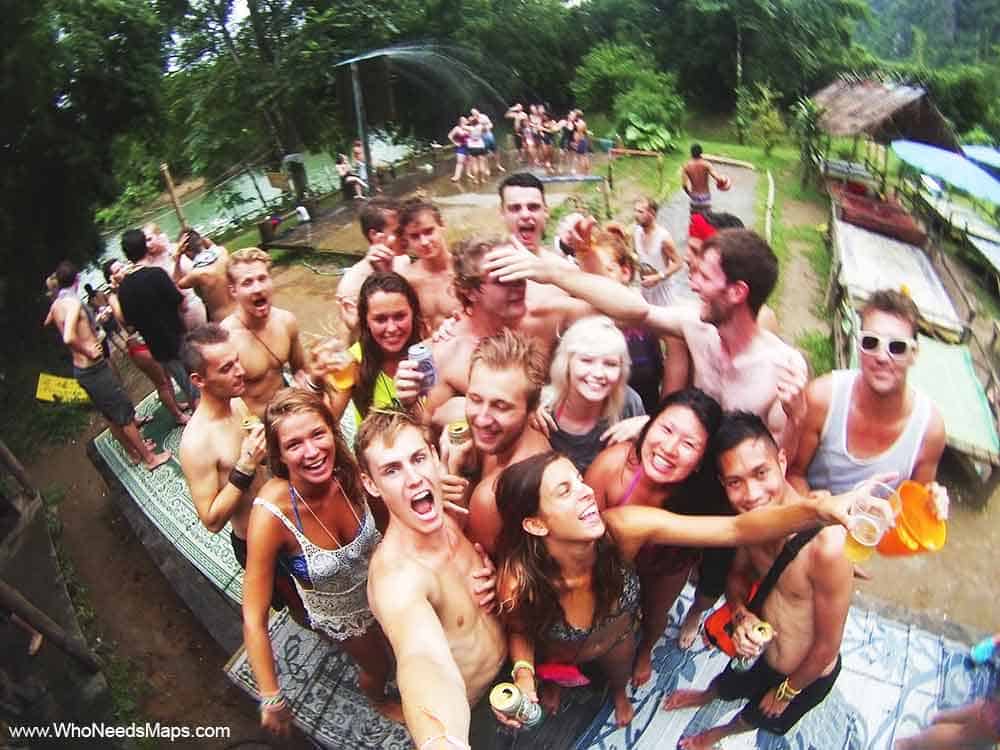 This is all about how you make your experience. On all boats they will offer drinks, but they all vary in age, luxury, party level, and price.

Ultimately, it is your choice!  We were told about the Rock Hard Rock Long cruise and was told it’s just a huge expensive frat drinking party. However, we went with a cruise that was heaps cheaper and less wild (booked through Hanoi Central Backpackers).

I mean, we were in Halong Bay, one of the 7 wonders of nature, we wanted to at least enjoy a bit of it!

We have friends that went hard on a Halong Bay tour and don’t remember much and we know people who took a simple, quite cruise that really enjoyed and appreciated the scenery.

On our boat, we met some really great people, jumped off the boat, swam everywhere, had a cooking class on board, and a few drinks (that we were secretly sold to us from a cute little Vietnamese woman on a canoe, we named her Jan).

We played a few drinking games, Jack got a foot massage (very steamy), and a few laughs, but in the end, it didn’t really escalate too much.

We ended up star gazing the rest of the night and saw a few shooting stars. However, this is an experience on how you make it. If you go for the party boat, you will get a party experience.

If you go for a quieter experience, you can’t expect a massive rager. 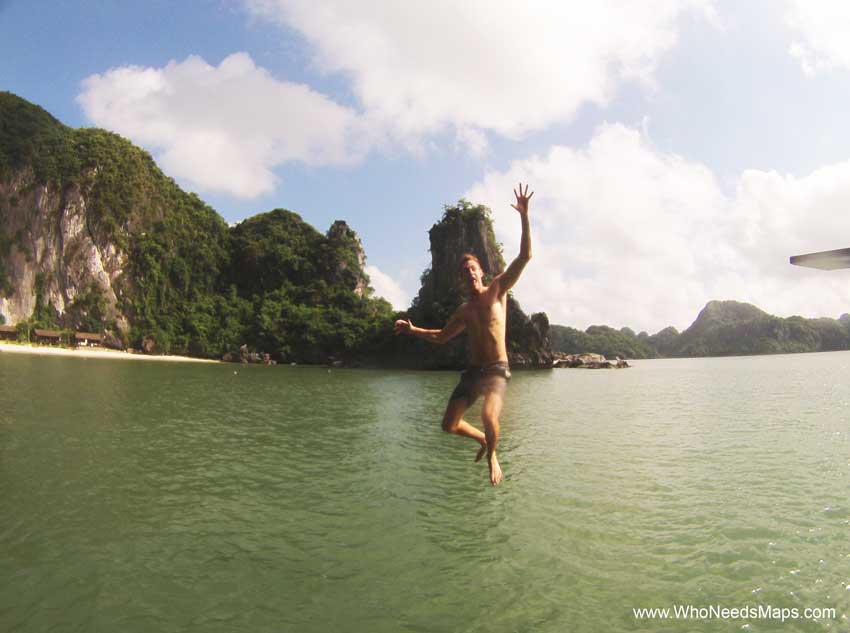 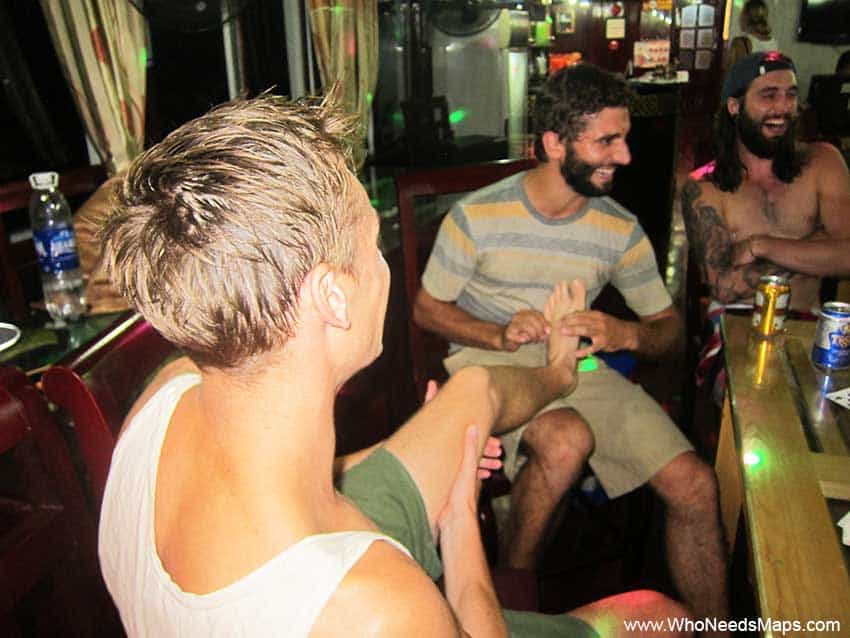 What a sexy foot rub!

Most people prefer going to Sihanoukville, a backpackers paradise, to take advantage of all the cheap booze and bars on the beach.

We also decided to try out Koh Rong. Koh Rong is a little island 45 minutes away from Sihanoukville by boat, and it is an unsolicited beauty.

You have to go now before it changes and it’s under full development.

Koh Rong is one of those chilled out beach vibes, where travelers drink beer (because company is great, not for the purpose of getting drunk), play guitars, twirl fire, share some epic stories, and skinny dip in the ocean.

People here partied because they were in good company on this amazing little beach island, rather than drinking to get plastered. It was the hunt of real pleasure.

Most hostels had an hour of free beers and a place called Island Boys which had a $5 BBQ with a free beer, so we met some great people, while chatting over several drinks!

Plus, while we were there, the World Cup semi finals were happening, so the vibe was super cool! 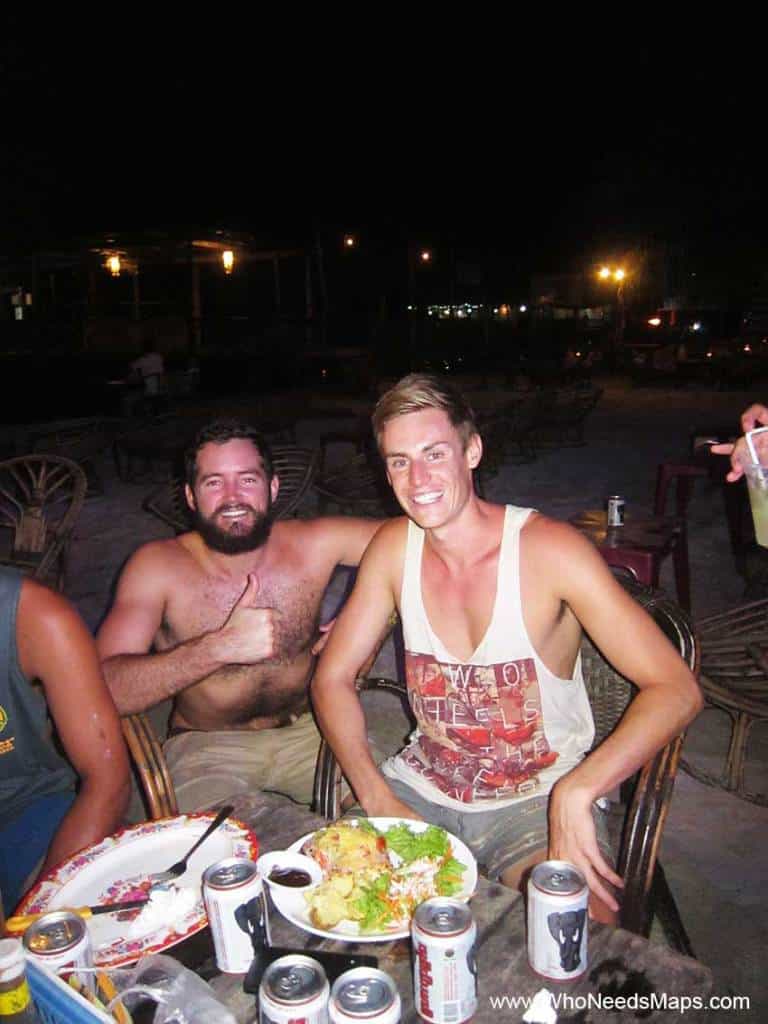 We don’t know how the idea of a silent disco came up. Was it just a few college kids having a party and the asshole neighbors were like “keep it down!”.

So some kid was like… “hm, why don’t we all listen to our own ipods and dance in the same room together?” It was all weird, but unexpectedly fun!

The silent disco was on Gili T, in Indonesia. The bar supplied us with headphones, two stations/DJs to choose from, and drink discounts.

People fought over (and even offered to pay) to get headphones for the silent disco! Put on your headphones, select a channel, and just dance.

It is so funny when you take off the headphones because all of a sudden every one is singing two different songs in the most tone def sort of way! It was hilarious.

Have fun while silently partying your butts off! 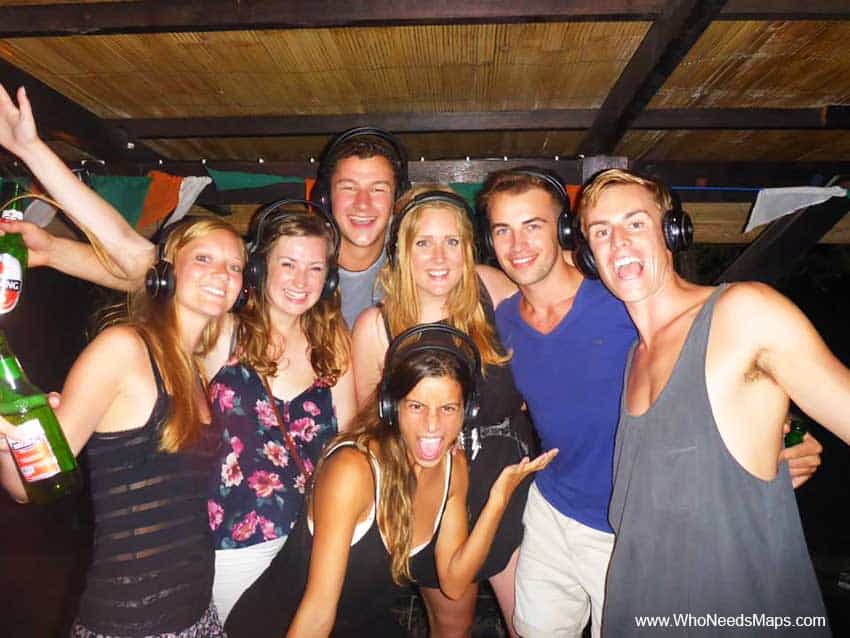 Here are other parties you should check out:

– Every other party in Koh Phangan: Koh Phangan has a reason to party almost every night. Don’t be upset if you miss the Full Moon Party! Check out the Half Moon party, Quarter moon party, Jungle Party, Waterfall party… you get the idea!

– Koh Tao Pub Crawl- If you go to Koh Tao, there will be a pub crawl every other night. There are awesome drink deals, a free t-shirt, you meet some great people, and you make some unforgettable (or maybe forgettable) memories! It sounds like a good time :)

– Borocay Beach- Borocay in the Philippines is infamous for its stretch of bars and clubs along the beach. especially station 2. DJ’s come from all over the world to perform at some of these places. There are plenty of places to see and things to do to keep your nightlife fun![/vc_column_text][/vc_column][/vc_row][vc_row][vc_column][vc_column_text]

FREE Download: Get the Perfect SouthEast Asia Travel Checklist Send it to me!

What are your top party destinations in Southeast Asia!?