We try to base our trip on peoples recommendations rather than by guide books. Lucky for us, we were recommended by a few friends to do the Le Family Rider motorbike tour in Vietnam from Hue to Hoi An by motorbike and said it was one of the highlights of their trip.

Originally, we were planning on just going straight by bus all the way through to Hoi An, but we are so happy we didn’t because this ride was one of the best days of our trip as well! We got off the bus at 8 am in Hue and were surrounded by a hoard of people asking “where are you going?”, “do you have a hotel?”, “how long are you staying?”. All very overwhelming and some people were even quite rude (some guy even said to “go fuck”…hmm).

But alas, we were saved and greeted with a ‘Welcome Jenn and Jack’ sign at the station by Le Family Riders, and even better yet, they brought us a traditional Bahn Mi sandwich for breakfast. We knew this was already off to a great start. Luy and Ngoc brought us to a nice little cafe, where the Aussie was happy to be in his element, drinking his coffee. We then met our tour guides for the day, Ngoc, the father of Le Family Riders, and Thuy, the daughter, who were seriously the nicest people we’ve met! And then we started for our adventure! 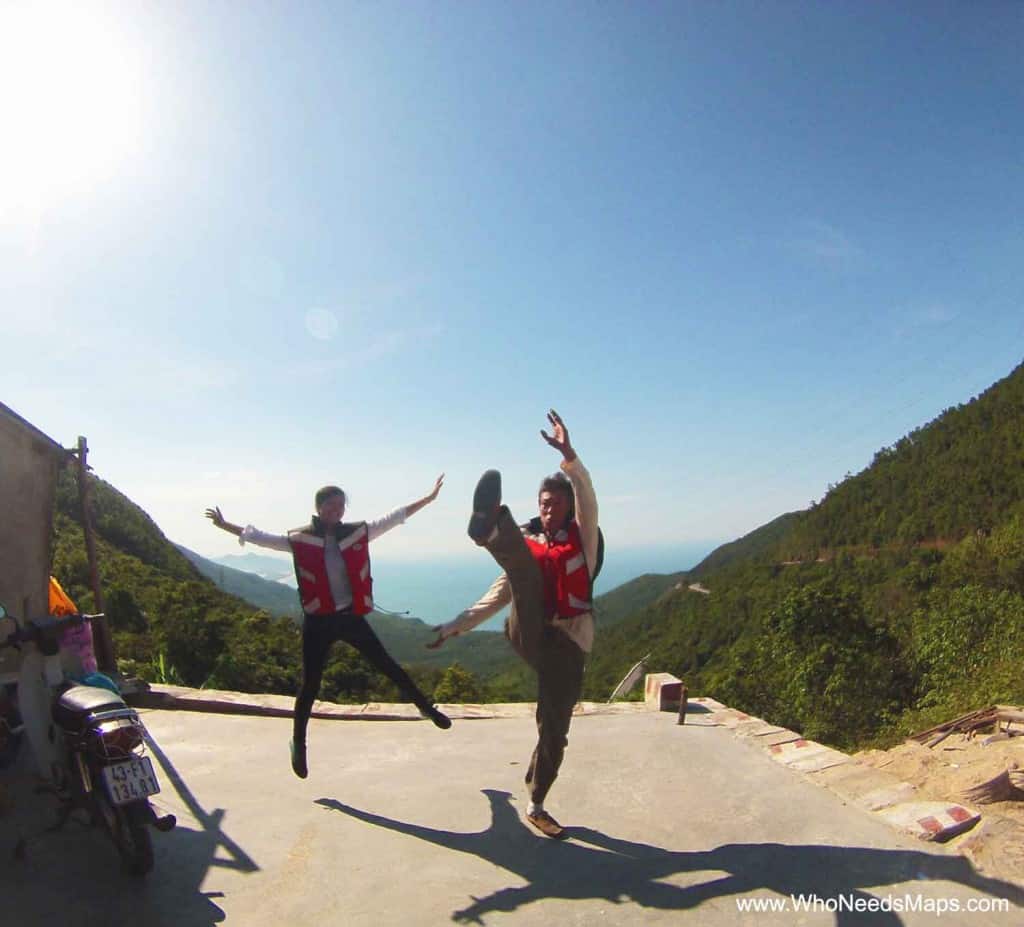 Our first stop was the fishing village. Thuy was very knowledgable about the little village, telling us about how they hand built the boats and when the best times to go fishing were. It was truly a beautiful landscape with all these manmade boats along the water.

Our second stop was the Elephant Waterfalls. It is lesser known by tourists, so we were quite excited to go see the waterfalls, but little did we know (as our luck continues), it was school holidays so there were tons of families, especially kids, swimming there! But hey, it was less touristy, it was mainly Vietnamese families.

The water was really refreshing after riding in the sun, especially at the waterfall spot where you can get a nice back massage! There was also a rock that you can climb on to and jump into the water, which was some good fun. After a nice cool down in the water, we met up with Ngoc and Thuy who had some cokes and some cold beer waiting for us. Legends! Nothing better than a cold beer after a nice swim on a hot and humid day.

Thuy also let us try these shrimp cakes (a local snack) that was made with some rice flour paste, shrimp, ham and wrapped in banana leaves, then boiled. It turned to a jelly like thing with a shrimp in the middle of it. Really tasted quite nice! 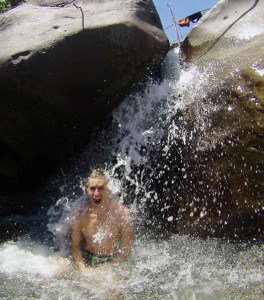 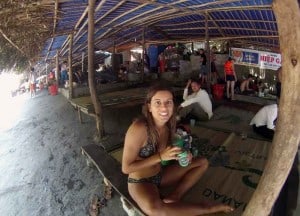 Next stop was probably our favorite of the tour because it was lunch. We always love lunch. Mmm…we’re drooling just thinking of it! We were taken to a floating restaurant above the water, that served us fresh seafood. We can’t even begin to tell you how much we ate.

They brought out maybe 8 dishes plus more beer and a fresh fruit platter that we hand picked at a local fruit market! The meal included fish, pork, squid, muscles, and squid. No joke- best meal in Vietnam.

Everything just tasted so fresh (and you can see the freshness as well as they kept all the seafood alive pre cooking!). They were also nice enough to teach us the difference between a female and male crab which was really interesting (who knew you could really tell a gender difference with crabs!). 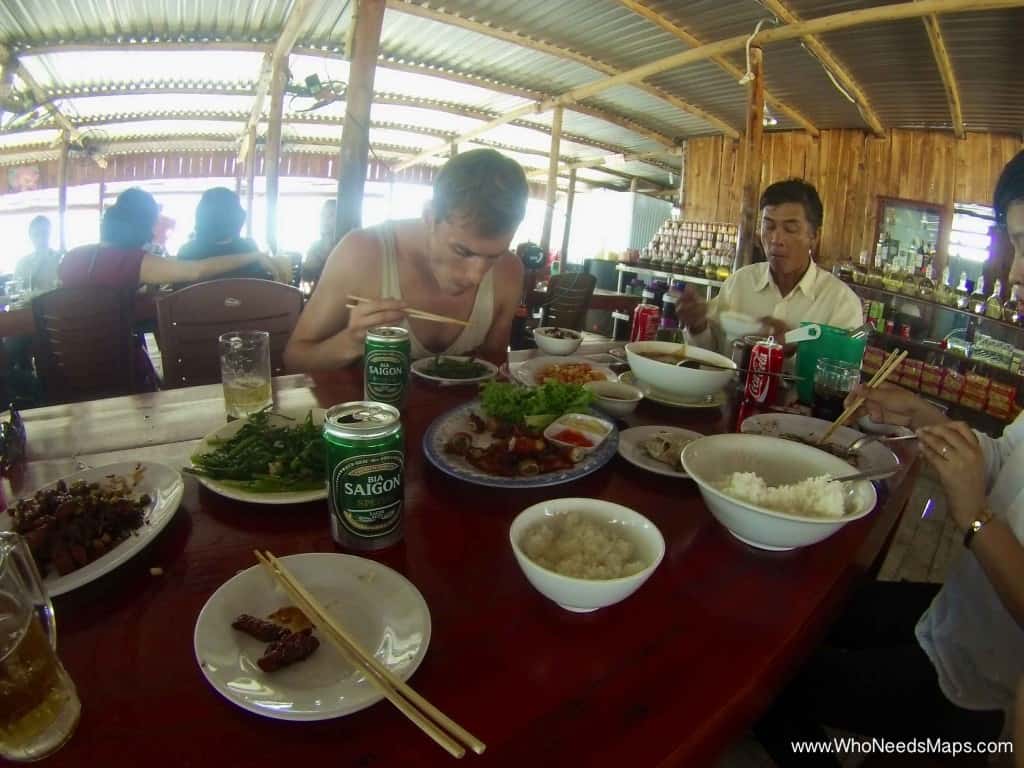 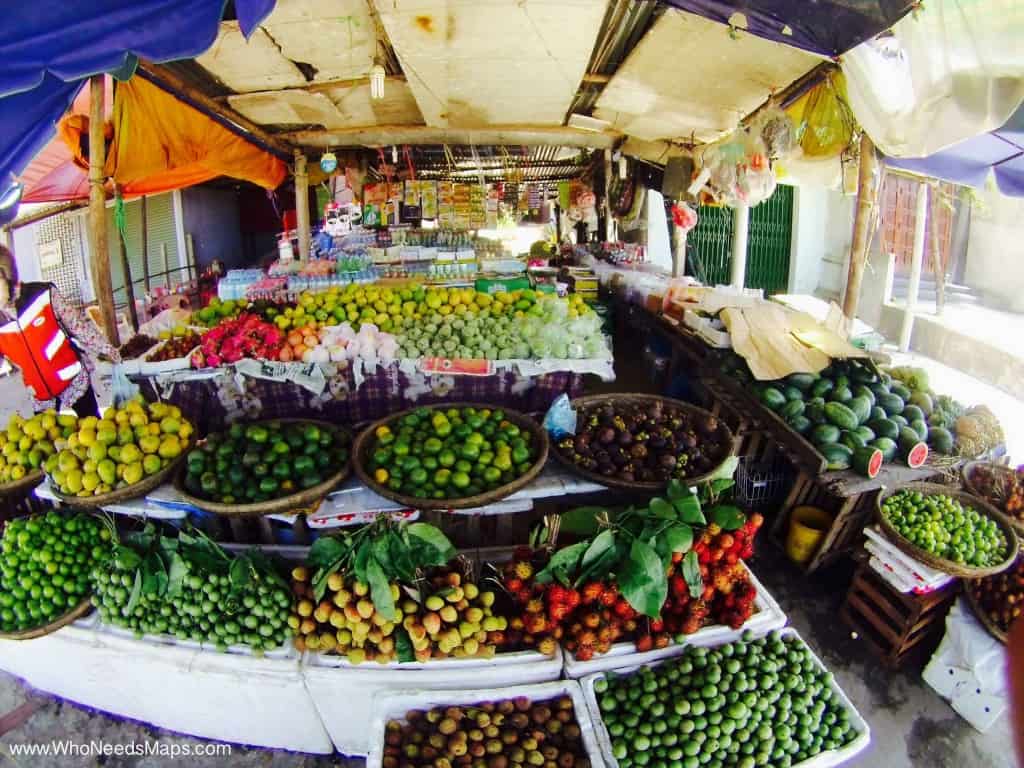 After lunch, we drove up to this really beautiful hill and saw old ruins and more impressively the view of Da Nang. Jack also got his coffee fix there. The view was absolutely amazing and it was so nice to stop there just for a bit of a break to cut the motor bike trip. 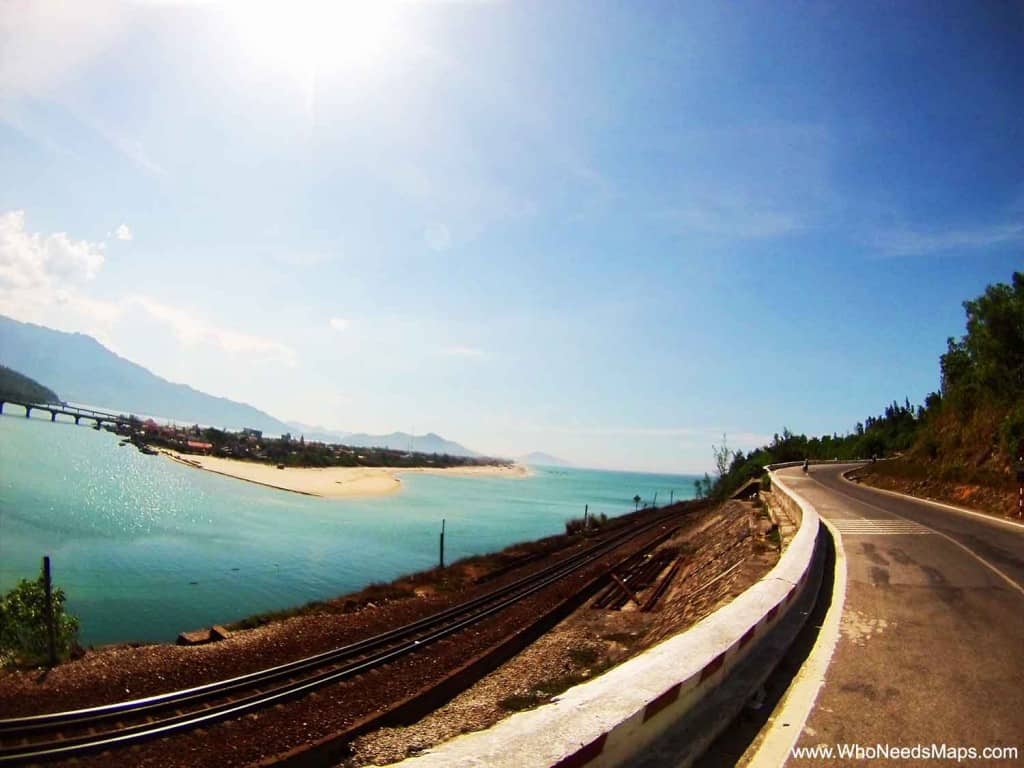 Once the coffee was deliciously enjoyed, we headed down to the beach. At this point we were slightly melting-our legs started to get a bit burnt and the breeze from the beach was much needed.

We looked at each other and thought the best thing to top off this beach day would be ice creams. Just as we said this, Thuy brought us two drumsticks! It was like she read our minds!! Thuy also realized Jack’s love for coffee and after an in depth coffee discussion, Thuy brought Jack a bag of the weasel poo coffee! Jack was happy, and maybe too happy… 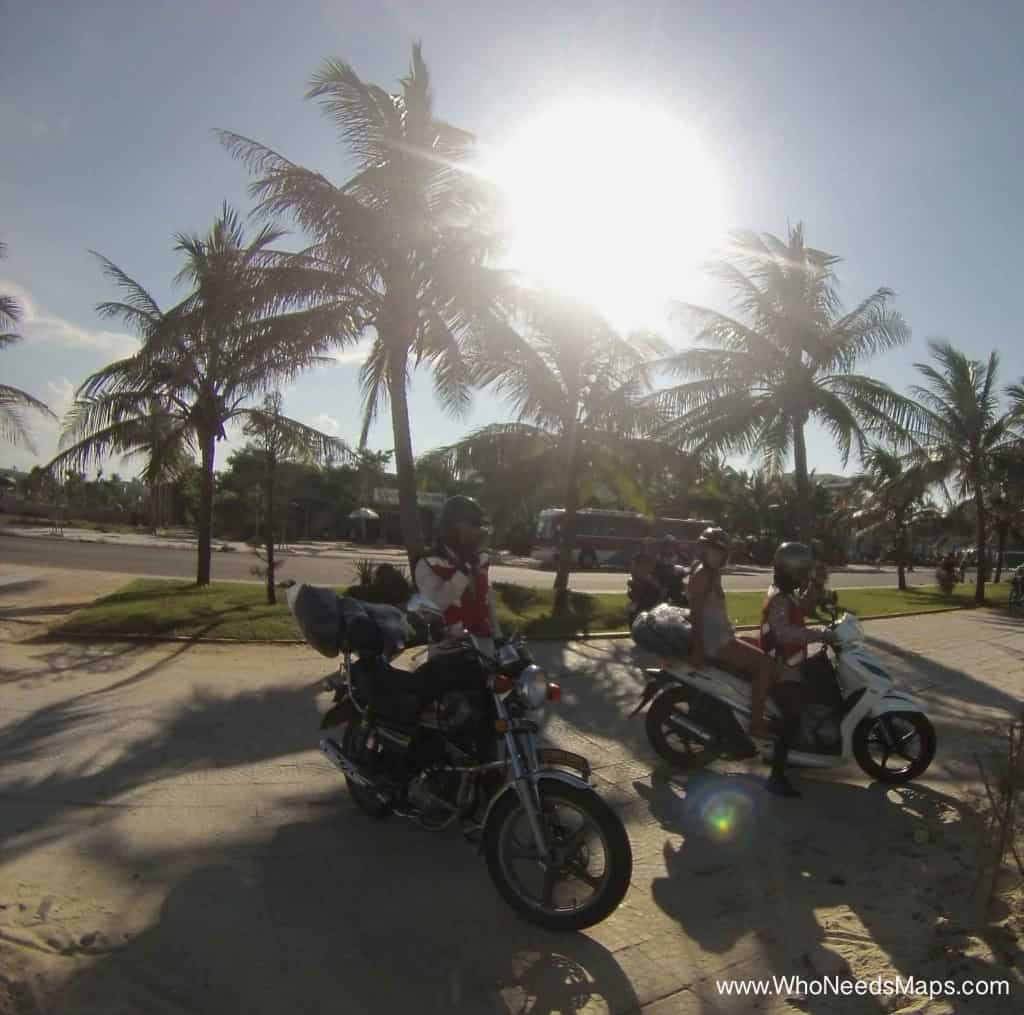 We then headed to Marble Mountain-all entries and maps paid for! They showed us where marble comes from, where statues are made, and the process on how they are made as well.

It was quite interesting and we were almost tempted to buy one of them because we saw all the hard work and detail they put into it! (but as backpackers, we all know fragile things are a no-go!) We then went up the elevator to explore the caves and temples in Marble Mountain. It was truly beautiful and we really enjoyed ourselves. The best is that from Hoi An, they do tours just to Marble Mountain for half the price we did our ENTIRE motorbike tour! So obviously, this ones recommended. 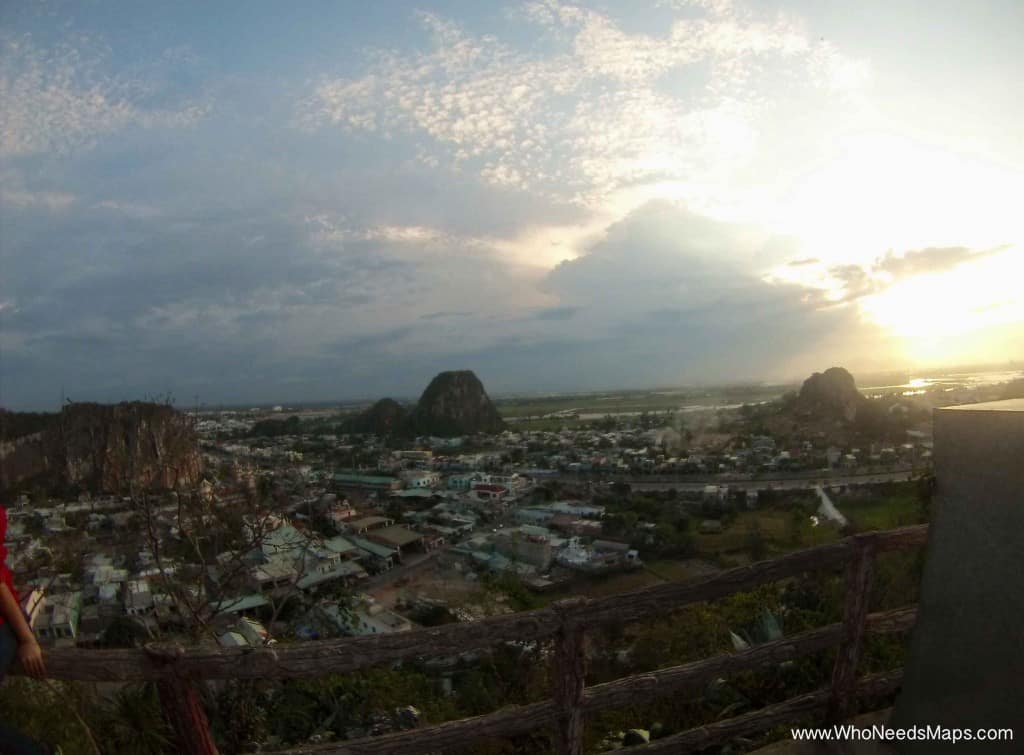 Finally, we got to Hoi An. They brought us to our hotel (which was fantastic, by the way, great service) and then we had to part.

Thuy and Ngoc were such nice and genuine people and we loved every second of our motorbike tour in Vietnam. It was also a great way to see the country side of Hue to Hoi An rather than spending an extra 5 hours on the bus. We would happily do it again if we had the time and it was definitely a highlight of our trip!

If you don’t believe how awesome they are check out their millions of reviews on Trip Advisor!

Have you done any motorbike country side adventures? Tell us more!